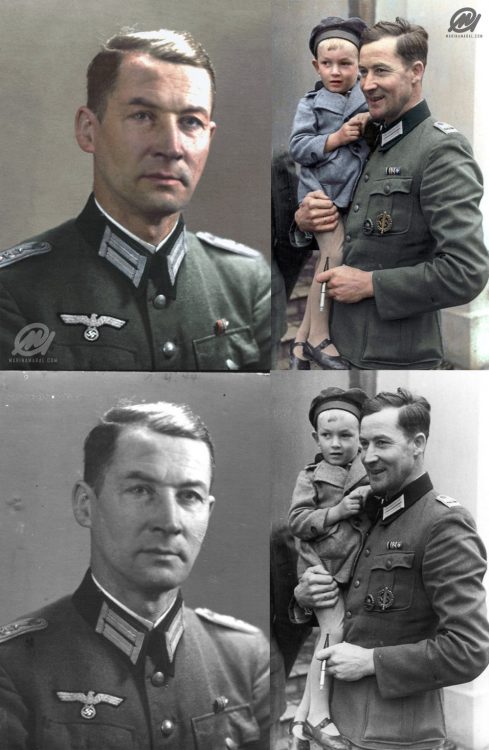 “Innumerable Jews have been killed like that, for no reason, senselessly. It is beyond understanding. Now the last remnants of the Jewish inhabitants of the ghetto are being exterminated. An SS Sturmführer boasted of the way they shot the Jews down as they ran out of the burning buildings. The entire ghetto has been razed by fire. These brutes think we shall win the war that way. But we have lost the war with this appalling mass murder of the Jews. We have brought shame upon ourselves that cannot be wiped out; it is a curse that cannot be lifted. We deserve no mercy; we are all guilty. I am ashamed to walk in the city”

— June 16, 1943 diary entry, upset by the orders to destroy the Warsaw Ghetto

Wilhelm Hosenfeld was born in a village in Hessen, Germany, in 1895. His family was Catholic and he grew up in a pious and conservative German patriotic environment. After serving as a soldier in World War I, he became a teacher, and taught at a local school. By the time World War II broke out, Hosenfeld was married and had five children. In the end of August 1939, a week before the German attack on Poland, 43-year-old Hosenfeld was drafted into the Wehrmacht (the German Army). He was stationed in Poland, first in Pabiance, and as of July 1940 in Warsaw, where he would stay until the end of the war. Hosenfeld spent most of the war years as a sports and culture officer, rising from the rank of sergeant to captain. In summer 1944, during the Polish uprising, when all military forces were engaged in suppressing the revolt, he was involved in the interrogation of prisoners.

Although joining the Nazi party in 1935, Hosenfeld soon grew disillusioned with the regime and disgusted by the crimes against Poles and Jews that he became witness to. All through his military service he kept a diary in which he expressed his feelings. The texts survived because he would regularly send the notebooks home. In his writing, Hosenfeld stressed his growing disgust with the regimes’ oppression of Poles, the persecution of Polish clergy, the abuse of Jews, and, with the beginning of the “Final Solution”, his horror at the extermination of the Jewish people. In 1943, after witnessing the suppression of the Warsaw Ghetto revolt, he wrote in his diary: “these animals. With horrible mass murder of the Jews we have lost this war. We have brought an eternal curse on ourselves and will be forever covered with shame. We have no right for compassion or mercy; we all have a share in the guilt. I am ashamed to walk in the city….”

Hosenfeld not only expressed his deep revulsion in words, but also actively helped the victims. Leon Warm escaped from a train to Treblinka during the 1942 deportations from Warsaw. He made it back into the city, and managed to survive with the help of Hosenfeld who employed him in the sports stadium, and provided him with a false identity. His help to another Jew became famous with the film “The Pianist”, based on Waldislaw Szpilman’s life story. After his entire family was killed, Szpilman managed to leave the ghetto and survived on the Aryan side with the help of Polish friends [Janina Godlewska, Andrezej Bogucki and Czeslaw Lewicki were honored as Righteous Among the Nations in 1978]. After the Polish Uprising in summer 1944, the Polish population was evicted from the city, and Szpilman remained alone, hiding in the ruins of the destroyed city, hungry, frozen, frightened and with no support whatsoever. It was there that Hosenfeld found him in mid-November 1944, and helped him survive during the critical final weeks before liberation.

In January 1945 Hosenfeld was taken prisoner by the Soviets. Five years later, on 7 May 1950 a military tribunal in Minsk sentenced him to 25 years in prison. The trial, so the one-page verdict stated, was held in the absence of the defense. The verdict stated that Hosenfeld had personally interrogated prisoners during the Warsaw uprising and sent them to detention, thereby strengthening Fascism in the struggle against the Soviet Union. Six months after the trial, in November 1950, Leon Warm came to visit Hosenfeld’s wife in Thalau. A Polish priest who had met Hosenfeld in the POW camp had found him and told him of his rescuer’s predicament. Warm, who was about to emigrate from Europe, also wrote a letter to Szpilman in Warsaw. It seems unlikely that something could have been done by the two survivors who had lost their families and who were, like others, working hard to pick up the pieces and try to build a life in a world that had little interest in the Jewish tragedy. Suffering several cerebral strokes, Hosenfeld died in a Soviet prison in 1952.

In memory of Czesława Kwoka