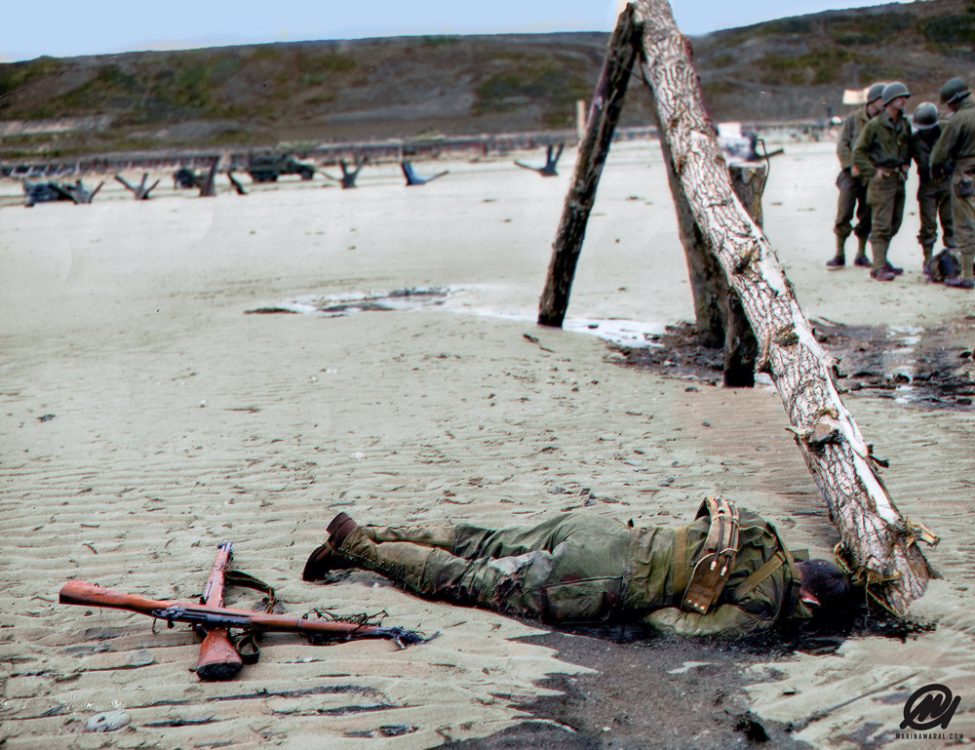 On June 6, 1944, the Allies invade Western Europe in the largest amphibious attack in history. During World War II (1939-1945), the Battle of Normandy, which lasted from June 1944 to August 1944, resulted in the Allied liberation of Western Europe from Nazi Germany’s control.

As soldiers of the U.S. Army’s 1st Infantry Division leaped from their landing craft into the choppy waters off Omaha Beach, many cursed the landing-craft pilots who had deposited them too far away from the invasion beach. German small-arms fire from the bluffs overlooking the approaches raked the surface of the water, while indirect artillery fire splashed amid the landing craft in the English Channel. (source: historynet)

The long-awaited assault on “Fortress Europe” began in the early hours of 6 June 1944 as the 16th Infantry Regiment moved toward Omaha Beach. As landing craft dropped their ramps, men were killed and wounded as they attempted to get out of the boats. Others were hit as they struggled through the surf or tried to run across the sand weighted down with water-logged equipment. Many were shot down, but others made it in close to the base of the bluff where they found the area mined and criss-crossed with concertina wire.

Eventually, an assault section of E Company under First Lieutenant John Spalding and Staff Sergeant Philip Streczyk managed to cross a minefield, breach the enemy wire, and struggle their way to the bluff. Colonel George A. Taylor, the regimental commander, noting the small breakthrough stood to his feet and yelled at his troops, “The only men who remain on this beach are the dead and those who are about to die! Let’s get moving!”

Soon other troops began making their way up the bluffs along Spaulding’s route while other gaps were blown through the wire and mines. By vicious fighting, some hand-to-hand, other sections, platoons, and eventually companies made it to the top and began pushing toward Colleville-Sur-Mer. By noon of that bloody day, the 16th Infantry had broken through the beach defenses and established a foothold that allowed follow-on units to land and move through.

The Normandy landings (codenamed Operation Neptune) were the landing operations on Tuesday, 6 June 1944 (termed D-Day) of the Allied invasion of Normandy in Operation Overlord during World War II. The largest seaborne invasion in history, the operation began the liberation of German-occupied northwestern Europe from Nazi control and contributed to the Allied victory on the Western Front. Planning for the operation began in 1943. In the months leading up to the invasion, the Allies conducted a substantial military deception, codenamed Operation Bodyguard, to mislead the Germans as to the date and location of the main Allied landings. The weather on D-Day was far from ideal, but postponing would have meant a delay of at least two weeks, as the invasion planners had requirements for the phase of the moon, the tides, and the time of day that meant only a few days in each month were deemed suitable. Adolf Hitler placed German Field Marshal Erwin Rommel in command of German forces and of developing fortifications along the Atlantic Wall in anticipation of an Allied invasion.

The amphibious landings were preceded by extensive aerial and naval bombardment and an airborne assault—the landing of 24,000 American, British, and Canadian airborne troops shortly after midnight. Allied infantry and armored divisions began landing on the coast of France at 06:30. The target 50-mile (80 km) stretch of the Normandy coast was divided into five sectors: Utah, Omaha, Gold, Juno, and Sword. Strong winds blew the landing craft east of their intended positions, particularly at Utah and Omaha. The men landed under heavy fire from gun emplacements overlooking the beaches, and the shore was mined and covered with obstacles such as wooden stakes, metal tripods, and barbed wire, making the work of the beach-clearing teams difficult and dangerous. Casualties were heaviest at Omaha, with its high cliffs. At Gold, Juno, and Sword, several fortified towns were cleared in house-to-house fighting, and two major gun emplacements at Gold were disabled, using specialized tanks.

The Allies failed to achieve any of their goals on the first day. Carentan, St. Lô, and Bayeux remained in German hands, and Caen, a major objective, was not captured until 21 July. Only two of the beaches (Juno and Gold) were linked on the first day, and all five beachheads were not connected until 12 June; however, the operation gained a foothold which the Allies gradually expanded over the coming months. German casualties on D-Day have been estimated at 4,000 to 9,000 men. Allied casualties were at least 10,000, with 4,414 confirmed dead.

Museums, memorials, and war cemeteries in the area now host many visitors each year.

Filthy Thirteen member Clarence Ware applies war paint to Charles Plaudo, 5 June 1944. The idea was McNiece’s, to honor his Native American heritage and to energize the men for the danger ahead.

Captain J M Stagg, a British Royal Air Force meteorologist who helped choose the date of the infamous landings. Stagg is famed for persuading General Dwight D. Eisenhower to postpone the date of the landings for an extra day.

Tsar Nicholas II Of Russia And His Children With Cossack Officers Of The Konvoy, 1916