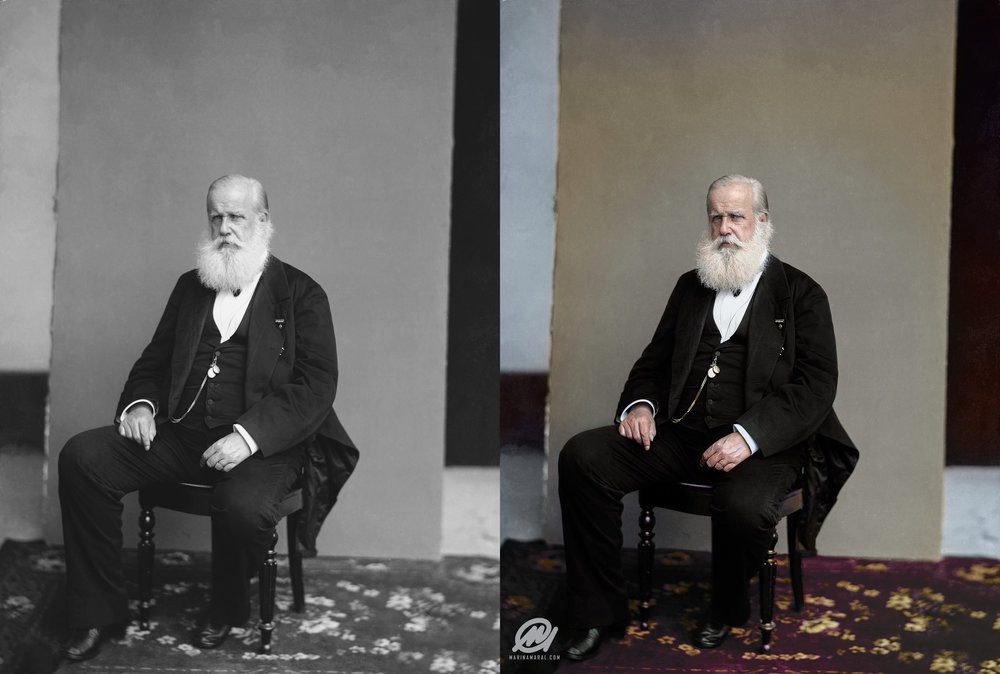 Today is celebrated Brazil’s Declaration of Independence from the United Kingdom of Portugal, Brazil and the Algarves on September 7, 1822. Dom Pedro II (photo), the last Emperor of Brazil, is the son of Dom Pedro I, the founder and first ruler of the Empire of Brazil.

In 1808, French troops commanded by Emperor Napoleon Bonaparte invaded Portugal as a retaliation for the Iberian country’s refusal to participate in the trade embargo against the United Kingdom. Fleeing persecution, the Portuguese monarchs transferred the Portuguese Court from Lisbon to Rio de Janeiro, then capital of Colonial Brazil. In 1815, Prince Regent John VI created the United Kingdom of Portugal, Brazil and the Algarves, elevating Brazil to the rank of kingdom and increasing its administrative independence. With the defeat of Napoleon, it was safe for the Portuguese crown to return to Portugal. However, John VI opted to stay in Brazil. With an increasingly irritated nobility in Portugal threatening to remove him from the throne, he returned only in 1821. His son, Pedro I (photo), remained as regent in Brazil, but after years of being Portugal’s equal, its status was reduced as the Portuguese elites tried to reassert imperial authority over the former colony. This change did not sit well with Brazilian elites who had been at the political center of the empire for thirteen years. With pressure mounting within Brazil, and with a wave of independence movements finding success throughout Spanish America, Brazil followed its own peculiar path, and on September 7, 1822, Pedro I formally broke with Portugal, allegedly proclaiming “Independence or Death!”.

Dom Pedro II (English: Peter II; 2 December 1825 – 5 December 1891), nicknamed “the Magnanimous”, was the second and last ruler of the Empire of Brazil, reigning for over 58 years. Born in Rio de Janeiro, he was the seventh child of Emperor Dom Pedro I of Brazil and Empress Dona Maria Leopoldina and thus a member of the Brazilian branch of the House of Braganza. His father’s abrupt abdication and departure to Europe in 1831 left a five-year-old Pedro II as Emperor and led to a grim and lonely childhood and adolescence. Obliged to spend his time studying in preparation for rule, he knew only brief moments of happiness and encountered few friends of his age. His experiences with court intrigues and political disputes during this period greatly affected his later character; he grew into a man with a strong sense of duty and devotion toward his country and his people, yet increasingly resentful of his role as monarch.

Inheriting an Empire on the verge of disintegration, Pedro II turned Portuguese-speaking Brazil into an emerging power in the international arena. The nation grew to be distinguished from its Hispanic neighbors on account of its political stability, zealously guarded freedom of speech, respect for civil rights, vibrant economic growth and especially for its form of government: a functional, representative parliamentary monarchy. Brazil was also victorious in three international conflicts (the Platine War, the Uruguayan War and the Paraguayan War) under his rule, as well as prevailing in several other international disputes and domestic tensions. Pedro II steadfastly pushed through the abolition of slavery despite opposition from powerful political and economic interests. A savant in his own right, the Emperor established a reputation as a vigorous sponsor of learning, culture and the sciences. He won the respect and admiration of scholars such as Charles Darwin, Victor Hugo and Friedrich Nietzsche, and was a friend to Richard Wagner, Louis Pasteur and Henry Wadsworth Longfellow, among others.

Although there was no desire for a change in the form of government among most Brazilians, the Emperor was overthrown in a sudden coup that had almost no support besides from a couple of military leaders who desired a form of republic headed by a dictator. Pedro II had become weary of emperorship and despaired over the monarchy’s future prospects, despite its overwhelming popular support. He did not allow his ouster to be opposed and did not support any attempt to restore the monarchy. He spent the last two years of his life in exile in Europe, living alone on very little money.

The reign of Pedro II thus came to an unusual end—he was overthrown while highly regarded by the people and at the pinnacle of his popularity, and some of his accomplishments were soon brought to naught as Brazil slipped into a long period of weak governments, dictatorships, and constitutional and economic crisis. The men who had exiled him soon began to see in him a model for the Brazilian republic. A few decades after his death, his reputation was restored and his remains were returned to Brazil with celebrations nationwide. Historians have regarded the Emperor in an extremely positive light.