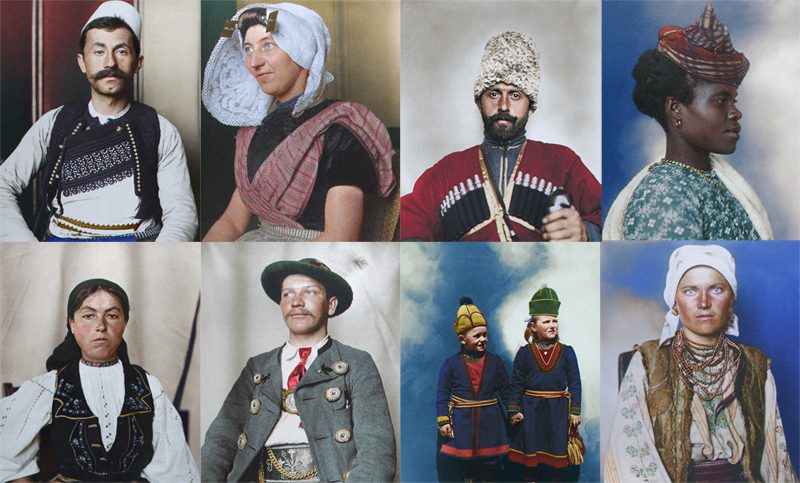 Between 1892 and 1954, Ellis Island served as an immigration inspection station for millions of immigrants arriving into the United States. The first immigrant to pass though the station was 17-year-old Annie Moore from Cork, Ireland, one of the 700 immigrants arriving on the opening day on January 1, 1892. The first and second class passengers were considered wealthy enough not to become a burden to the state and were examined onboard the ships while the poorer passengers were sent to the island where they underwent medical examinations and legal inspections. These images of people wearing their folk costumes were taken by amateur photographer Augustus Sherman who worked as the Chief Registry Clerk on Ellis Island from 1892 until 1925. The people in the photographs were most likely detainees who were waiting for money, travel tickets or someone to come and collect them from the island. In 1907, the photographs were published in National Geographic, and they were also hung on the walls of the lower Manhattan headquarters of the federal Immigration Service.

1907 was the busiest year for Ellis Island, with an all-time high of 11,747 immigrants arriving in April. Approved immigrants spent between three to five hours on the island where they underwent medical examinations and were asked questions regarding their occupation and the money they owned, it being preferable for them to have a starting sum when they arrived in the country. Two percent of the immigrants were denied admission on the grounds of suffering from contagious diseases or insanity, or alternatively by virtue of having a criminal background. In the 1920s, restrictions were placed on the percentage of immigrants arriving from various countries or ethnic backgrounds, as immigrants from Southern and Eastern Europe were seen as inferior to the earlier immigrants from Northern and Western Europe. The facilities later served as a detention and deportation processing station, and during the Second World War, German, Italian, and Japanese resident aliens were detained on the island. Source

Identified as “Girl from the Kochersberg region near Strasbourg, Alsace”

Cossack man from the steppes of Russia.

Identified as ‘Protestant woman from Zuid-Beveland, province of Zeeland, The Netherlands’

Formerly titled “Swedish woman;” costume is from the west coast of Norway.

Fascinated by the diverse origins and cultural backgrounds of his subjects, Sherman created a riveting series of portraits, offering viewers a compelling perspective on this dynamic period in American history. Very little is known about him. Born on July 9, 1865, in Lynn, Pennsylvania, he was a member of the Protestant Episcopal Church. Hired by the Bureau of Immigration to work as a clerk at Ellis Island in 1892, eight years after having moved to New York, he rose through the clerical ranks. Considering the state of the art of photography in that era, with long exposures and huge box cameras, the fact he was able to capture so many images during his working life is amazing. Over the course of his career at Ellis Island, Sherman took more than 200 pictures, often encouraging his subjects to open their suitcases and put on their elaborate national costumes or folk dress. He captured images of Romanian shepherds, German stowaways, circus performers and women from Guadeloupe.

Ellis Island, in Upper New York Bay, was the gateway for over 12 million immigrants to the U.S. as the United States’ busiest immigrant inspection station for over 60 years.

These photographs were restored and colorized over the course of 4 days.
The originals were provided by the New York Public Library.