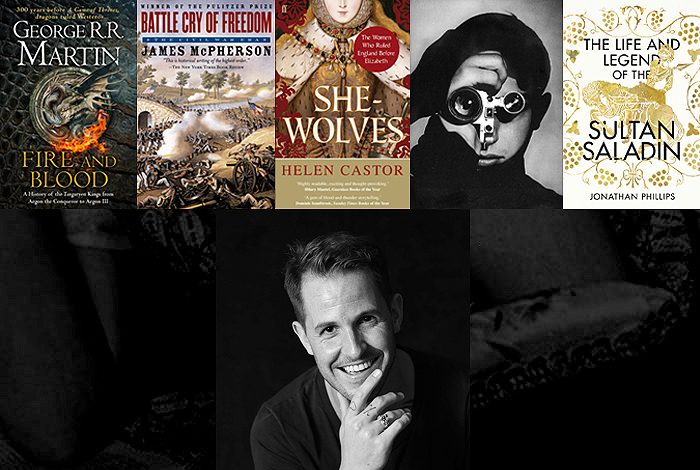 I believe there are no better people to recommend history books than good historians and good authors, and that’s why I asked Dan, definitely one of my favorites, to be my first guest in the FavoriteFive – a series of blog posts in which every week a different historian will share five of their favorite titles with you. These are Dan’s.

The Life and Legend of the Sultan Saladin by Jonathan Phillips
My favourite history book of 2019 so far: a pretty much perfect work of popular biography by one of the greatest living crusades scholars. Jonathan Phillips brings Saladin to life in ways that haven’t been seen before, drawing on new work on Islamic poetry while conjuring a vivid and exciting picture of the Near East in the crusader years. Brilliant.

She-Wolves: The Queens Who Ruled England Before Elizabeth by Helen Castor
The one person who did most to get me going about the Middle Ages was my first supervisor at Cambridge, Helen Castor. She-Wolves is a genuinely great work of intelligent popular history, deftly unpacking a thesis about female rule in medieval England while spinning a quartet of gripping narratives about the queens who came before Gloriana. I go back to it all the time for inspiration when I’m writing.

Battle Cry Of Freedom: The Civil War Era by James M. McPherson
You could spend your whole life reading books about the US Civil War, but this is a great – maybe the greatest? – single-volume narrative of a war that continues to show its scars in modern America.

Life Photographers: What They Saw by John Loengard
You can pick this gem up second hand online for less than £2, which is insane. John Loengard interviewed almost every one of the greatest photographers who worked on the world-changing American weekly magazine between the 1930s and 1970s. This book contains their finest pictures and their astonishing, spine-tingling reminiscences about their adventures in the field, from war zones to Hollywood parties. It is the history book I have gifted to more people than any other.

Fire and Blood: A History of the Targaryen Kings from Aegon the Conqueror to Aegon III by George R.R. Martin
I know this is ‘fake history’, concerning the lore and legend of the fictional realm of Westeros. But it is also a dazzling tour de force of historical form – almost the perfect work of popular narrative history by a writer who is as wonderful a historical storyteller as he is a fantasist.

The Life and Legend of the Sultan Saladin

Fire and Blood: A History of the Targaryen Kings from Aegon the Conqueror to Aegon III

Life Photographers: What They Saw

She-Wolves: The Queens Who Ruled England Before Elizabeth