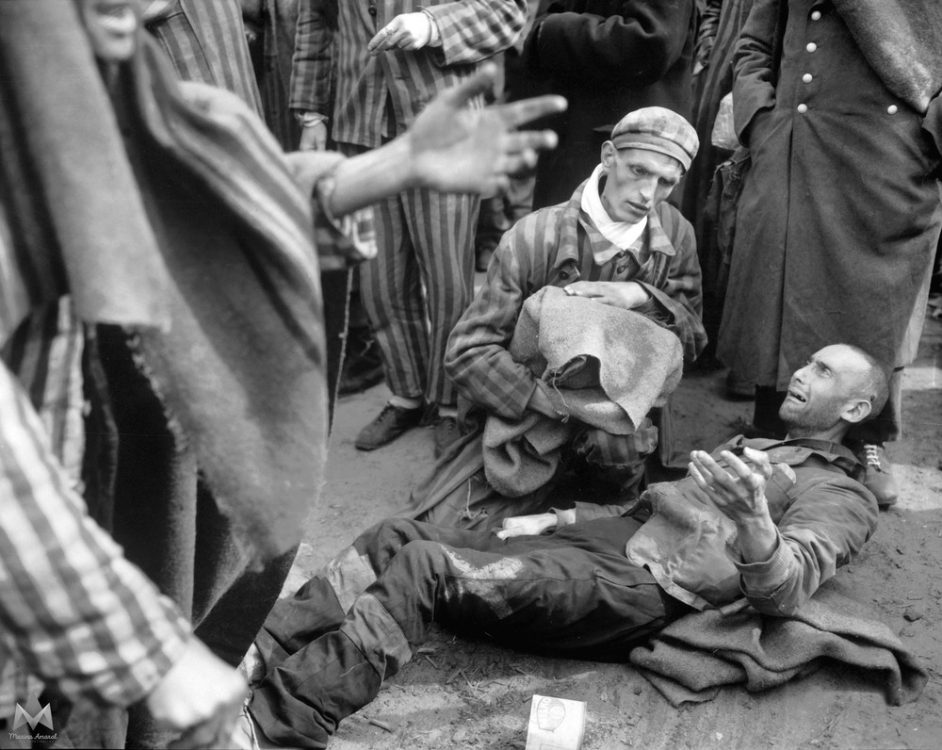 At the German concentration camp at Wobbelin, many inmates were found by the U.S. Ninth Army in pitiful condition. Here one of them breaks out in tears when he finds he is not leaving with the first group to the hospital.

The Wöbbelin camp, near the city of Ludwigslust, was a subcamp of the Neuengamme concentration camp. The SS had established Wöbbelin to house concentration camp prisoners whom the SS had evacuated from other camps to prevent their liberation by the Allies. At its height, Wöbbelin held some 5,000 inmates, most of whom were suffering from starvation and disease. On May 2, 1945, the 8th Infantry Division and the 82nd Airborne Division encountered Wöbbelin. Living conditions in the camp when the U.S. 8th Infantry and the 82nd Airborne arrived were deplorable. There was little food or water and some prisoners had resorted to cannibalism. When the units arrived, they found about 1,000 inmates dead in the camp. In the aftermath, the U.S. Army ordered the townspeople in Ludwigslust to visit the camp and bury the dead. On May 7, 1945, the 82nd Airborne Division conducted funeral services for 200 inmates in the town of Ludwigslust. Attending the ceremony were citizens of Ludwigslust, captured German officers, and several hundred members of the airborne division. The U.S. Army chaplain at the service delivered a eulogy stating that:

“The crimes here committed in the name of the German people and by their acquiescence were minor compared to those to be found in concentration camps elsewhere in Germany. Here there were no gas chambers, no crematoria; these men of Holland, Russia, Poland, Czechoslovakia, and France were simply allowed to starve to death. Within four miles of your comfortable homes 4,000 men were forced to live like animals, deprived even of the food you would give to your dogs. In three weeks 1,000 of these men were starved to death; 800 of them were buried in pits in the nearby woods. These 200 who lie before us in these graves were found piled four and five feet high in one building and lying with the sick and dying in other buildings.”

In accordance with a policy mandated by General Dwight D. Eisenhower, the Supreme Commander of the Allied Forces, the U.S. Army in Ludwigslust ordered “all atrocity victims to be buried in a public place” with crosses placed at the graves of Christians and Stars of David on the Jewish graves, along with a stone monument to commemorate the dead.