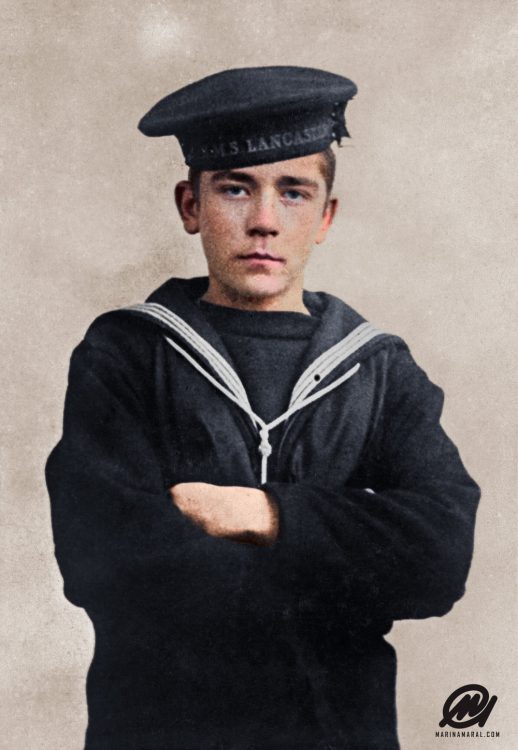 John Travers Cornwell VC (8 January 1900 – 2 June 1916), commonly known as Jack Cornwell or as Boy Cornwell, is remembered for his gallantry at the Battle of Jutland. Having died at the age of only 16, he was posthumously awarded the Victoria Cross, the highest award for gallantry in the face of the enemy that can be awarded to British and Commonwealth forces. Cornwell is the third-youngest recipient of the VC after Andrew Fitzgibbon and Thomas Flinn.

John “Jack” Travers Cornwell was born third child into a working-class family at Clyde Place, Leyton, Essex (now in Greater London). His parents were Eli and Alice Cornwell. The family later moved to Alverstone Road, East Ham. He left Walton Road School at the then standard age of 14, but was in the Boy Scouts. At the outbreak of the First World War, ex-soldier Eli Cornwell volunteered for service and was fighting in France under Lord Kitchener. The older brother Arthur also served in an infantry regiment in Flanders.

In October 1915, Jack Cornwell gave up his job as a delivery boy and enlisted in the Royal Navy, without his father’s permission. He had references from his headmaster and employer. He carried out his basic training at HMS Vivid Keyham Naval Barracks at Plymouth and received further training as a Sight Setter or Gun Layer and became Boy Seaman First Class. On the Easter Monday of 1916, Cornwell left for Rosyth, Scotland to join his assignment in the navy. He was assigned to HMS Chester.

On 31 May 1916, Chester was scouting ahead of the 3rd Battlecruiser Squadron at the Battle of Jutland when the ship turned to investigate gunfire in the distance. At 17:30 hours, the Chester soon came under intense fire from four Kaiserliche Marine cruisers each her own size which had suddenly emerged from the haze and increasing funnel smoke of the battlefield. The shielded 5.5-inch gun mounting where Cornwell was serving as a sight-setter was affected by at least four nearby hits. The Chester’s gun mountings were open-backed shields and did not reach down to the deck. Splinters were thus able to pass under them or enter the open back when shells exploded nearby or behind. All the gun’s crew were killed or mortally injured except Cornwell, who, although severely wounded, managed to stand up again and remain at his post for more than 15 minutes, until Chester retired from the action with only one main gun still working. Chester had received a total of 18 hits, but partial hull armour meant that the interior of the ship suffered little serious damage and the ship itself was never in peril. Nevertheless, the situation on deck was dire. Many of the gun crews had lost lower limbs due to splinters passing under the gun shields. British ships report passing the Chester to cheers from limbless wounded gun crew laid out on her deck and smoking cigarettes, only to hear that the same crewmen had died a few hours later from blood loss and shock.

After the action, ship medics arrived on deck to find Cornwell the sole survivor at his gun, shards of steel penetrating his chest, looking at the gun sights and still waiting for orders. Being incapable of further action, Chester was ordered to the port of Immingham. There Cornwell was transferred to Grimsby General Hospital, although he was clearly dying. He died on the morning of 2 June 1916 before his mother could arrive at the hospital.