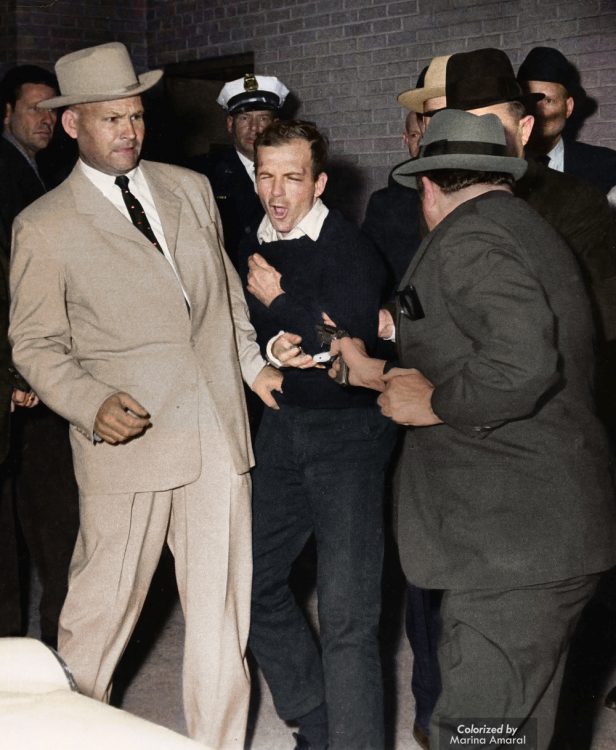 At 12:20 p.m., in the basement of the Dallas police station, Lee Harvey Oswald, the alleged assassin of President John F. Kennedy, is shot to death by Jack Ruby, a Dallas nightclub owner.

On November 22, President Kennedy was fatally shot while riding in an open-car motorcade through the streets of downtown Dallas. Less than an hour after the shooting, Lee Harvey Oswald killed a policeman who questioned him on the street. Thirty minutes after that, he was arrested in a movie theater by police. Oswald was formally arraigned on November 23 for the murders of President Kennedy and Officer J.D. Tippit.

On November 24, Oswald was brought to the basement of the Dallas police headquarters on his way to a more secure county jail. A crowd of police and press with live television cameras rolling gathered to witness his departure. As Oswald came into the room, Jack Ruby emerged from the crowd and fatally wounded him with a single shot from a concealed .38 revolver. Ruby, who was immediately detained, claimed that rage at Kennedy’s murder was the motive for his action. Some called him a hero, but he was nonetheless charged with first-degree murder.

Jack Ruby, originally known as Jacob Rubenstein, operated strip joints and dance halls in Dallas and had minor connections to organized crime. He also had a relationship with a number of Dallas policemen, which amounted to various favors in exchange for leniency in their monitoring of his establishments. He features prominently in Kennedy-assassination theories, and many believe he killed Oswald to keep him from revealing a larger conspiracy. In his trial, Ruby denied the allegation and pleaded innocent on the grounds that his great grief over Kennedy’s murder had caused him to suffer “psychomotor epilepsy” and shoot Oswald unconsciously. The jury found him guilty of the “murder with malice” of Oswald and sentenced him to die.

In October 1966, the Texas Court of Appeals reversed the decision on the grounds of improper admission of testimony and the fact that Ruby could not have received a fair trial in Dallas at the time. In January 1967, while awaiting a new trial, to be held in Wichita Falls, Ruby died of lung cancer in a Dallas hospital.

The official Warren Commission report of 1964 concluded that neither Oswald nor Ruby were part of a larger conspiracy, either domestic or international, to assassinate President Kennedy. Despite its seemingly firm conclusions, the report failed to silence conspiracy theories surrounding the event, and in 1978 the House Select Committee on Assassinations concluded in a preliminary report that Kennedy was “probably assassinated as a result of a conspiracy” that may have involved multiple shooters and organized crime. The committee’s findings, as with those of the Warren Commission, continue to be widely disputed.