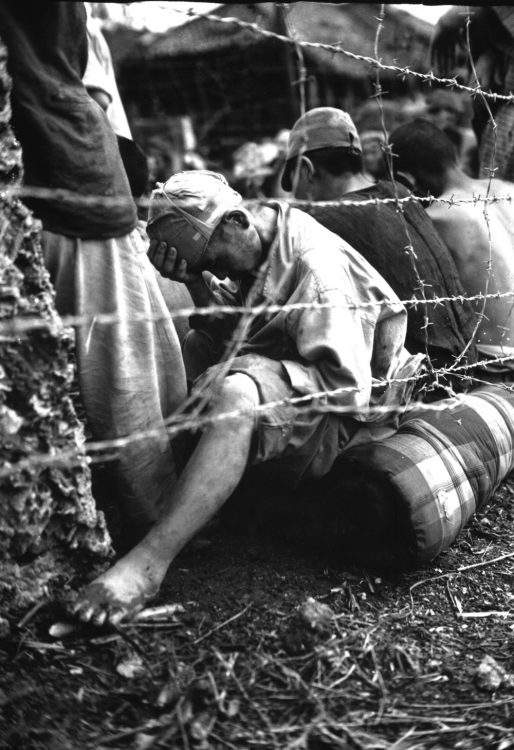 One of the most famous Marine pictures of WWII, showing Ison (1916-2001) running over bare ground in Death Valley, Okinawa, the photographer, Bob Bailey, was lying flat in the dirt snapping the shot as he ran past, dodging marine gun fire from many sides. The Marine Corps took up the shot and it was widely used in the Press to illustrate the doggedness, fortitude, and tenacity of the front-line Marine.

Ison, 1st Division, 3rd Battalion, Lima company was a demolitions man in a group of 4 who were sent ahead to knock out defensive pillboxes and positions. In this episode in Death Valley he had already run across two times and somehow remained unscathed. The first was in the morning, to reach the demo position. The second was to return to HQ to pick up the explosives which they had previously been told were already at the demo site. The third was to return to the demo site with the explosives. This is Ison’s own copy of the image, the original image having the figure slightly to the left of center.

He was 28 when the photo was taken and had four kids when he joined the Marine Corps to defend his country. On this day, in an eight-hour period, the Marines sustained 125 casualties crossing this particular valley. The Marine Corps Historical Centre (1998) notes that: overall American losses in the land battle (on Okinawa) amounted to 7,374 killed, 31,807 wounded and 239 missing in action. At sea and in the air, the Navy reported 36 US ships sunk, 368 damaged, 763 aircraft lost to all causes, 4,907 seamen killed or missing in action and 4,824 wounded.

Despite the magnitude of these losses by the Americans, the Japanese sustained even greater casualties at Okinawa than in any previous Pacific battle.

The US military estimates that 110,071 Japanese soldiers were killed during the battle. This total includes conscripted Okinawan civilians.A total of 7,401 Japanese regulars and 3,400 Okinawan conscripts surrendered or were captured during the battle. Additional Japanese and renegade Okinawans were captured or surrendered over the next few months, bringing the total to 16,346. This was the first battle in the Pacific War in which thousands of Japanese soldiers surrendered or were captured. Many of the prisoners were native Okinawans who had been pressed into service shortly before the battle, and were less imbued with the Imperial Japanese Army’s no-surrender doctrine. When the American forces occupied the island, many Japanese soldiers put on Okinawan clothing to avoid capture, and some Okinawans would come to the Americans’ aid by offering to identify these mainland Japanese.

The Japanese lost 16 combat vessels, including the super battleship Yamato. Postwar examination of Japanese records revealed that Japanese aircraft losses at Okinawa were far below often-repeated US estimates for the campaign. The number of conventional and kamikaze aircraft actually lost or expended by the 3rd, 5th, and 10th Air Fleets, combined with about 500 lost or expended by the Imperial Army at Okinawa, was roughly 1,430. The Allies destroyed 27 Japanese tanks and 743 artillery pieces (including mortars, anti-tank and anti-aircraft guns), some of them eliminated by the naval and air bombardments but most knocked out by American counter-battery fire.

Some of the other islands that saw major battles in World War II, such as Iwo Jima, were uninhabited or had been evacuated. Okinawa, by contrast, had a large indigenous civilian population; US Army records from the planning phase of the operation make the assumption that Okinawa was home to about 300,000 civilians. According to various estimates, between a tenth and a third of them died during the battle, between 30,000 and 100,000. Okinawa Prefecture’s estimate is over 100,000 losses, while the official US Army count for the 82-day campaign is a total of 142,058 civilian casualties, including those killed by artillery fire, air attacks, and those pressed into service by the Imperial Japanese Army.

During the battle, American soldiers found it difficult to distinguish civilians from soldiers. It became common for them to shoot at Okinawan houses.

In its history of the war, the Okinawa Prefectural Peace Memorial Museum presents Okinawa as being caught between the United States and the Empire of Japan. During the 1945 battle, the Japanese Army showed indifference to Okinawans’ safety, and its soldiers even used civilians as human shields or just outright murdered them. The Japanese military confiscated food from the Okinawans and executed those who hid it, leading to mass starvation, and forced civilians out of their shelters. Japanese soldiers also killed about 1,000 people who spoke in the Okinawan language to suppress spying. The museum writes that “some were blown apart by [artillery] shells, some finding themselves in a hopeless situation were driven to suicide, some died of starvation, some succumbed to malaria, while others fell victim to the retreating Japanese troops.”

With the impending Japanese defeat, civilians often committed mass suicide, urged on by the Japanese soldiers who told locals that victorious American soldiers would go on a rampage of killing and raping. Ryūkyū Shimpō, one of the two major Okinawan newspapers, wrote in 2007: “There are many Okinawans who have testified that the Japanese Army directed them to commit suicide. There are also people who have testified that they were handed grenades by Japanese soldiers” to blow themselves up. Thousands of civilians, having been induced by Japanese propaganda to believe that American soldiers were barbarians who committed horrible atrocities, killed their families and themselves to avoid capture. Some of them threw themselves and their family members from the southern cliffs where the Peace Museum now resides. Okinawans “were often surprised at the comparatively humane treatment they received from the American enemy”. Islands of Discontent: Okinawan Responses to Japanese and American Power by Mark Selden notes that the Americans “did not pursue a policy of torture, rape, and murder of civilians as Japanese military officials had warned”. American Military Intelligence Corps combat translators such as Teruto Tsubota managed to convince many civilians not to kill themselves. Survivors of the mass suicides blamed also the indoctrination of their education system of the time, in which the Okinawans were taught to become “more Japanese than the Japanese”, and were expected to prove it.

Witnesses and historians reported that soldiers, mainly Japanese troops, raped Okinawan women during the battle. Rape by Japanese troops “became common” in June, after it became clear that the Japanese Army had been defeated. Marine Corps officials in Okinawa and Washington have said that they knew of no rapes by American personnel in Okinawa at the end of the war. There are, however, numerous credible testimony accounts which allege that a large number of rapes were committed by American forces during the battle. This includes claimed rape after trading sexual favors or even marrying Americans, such as the alleged incident in the village of Katsuyama, where civilians said they had formed a vigilante group to ambush and kill three black American soldiers whom they claimed would frequently rape the local girls there.

A MAJOR NEW HISTORY OF THE WORLD – THE COLOUR OF TIME