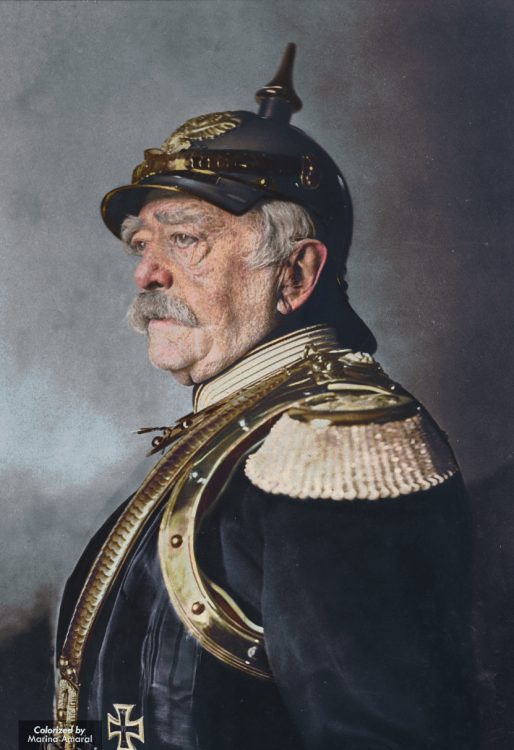 Germany became a modern, unified nation under the leadership of the “Iron Chancellor” Otto von Bismarck (1815-1898), who between 1862 and 1890 effectively ruled first Prussia and then all of Germany. A master strategist, Bismarck initiated decisive wars with Denmark, Austria and France to unite 39 independent German states under Prussian leadership. Although an arch-conservative, Bismarck introduced progressive reforms—including universal male suffrage and the establishment of the first welfare state—in order to achieve his goals. He manipulated European rivalries to make Germany a world power, but in doing so laid the groundwork for both World Wars.

Otto Eduard Leopold von Bismarck was born April 1, 1815, at his family’s estate in the Prussian heartland west of Berlin. His father was a fifth-generation Junker (a Prussian landowning noble), and his mother came from a family of successful academics and government ministers. Throughout his life Bismarck would emphasize his rural Junker roots, underplaying his considerable intellect and cosmopolitan outlook. Bismarck was educated in Berlin and after university took a series of minor diplomatic posts before retiring, at age 24, to run his family’s estate at Kneiphof. In 1847 he married and was sent to Berlin as a delegate to the new Prussian parliament, where he emerged as a reactionary voice against the liberal, anti-autocratic Revolutions of 1848. From 1851 to 1862 Bismarck served a series of ambassadorships—at the German Confederation in Frankfurt, in St. Petersburg and in Paris—that gave him valuable insight into the vulnerabilities of Europe’s great powers. William I became Prussia’s king in 1861 and a year later appointed Bismarck as his chief minister. Though technically deferring to William, in reality Bismarck was in charge, manipulating the king with his intellect and the occasional tantrum while using royal decrees to circumvent the power of elected officials. In 1864 Bismarck began the series of wars that would establish Prussian power in Europe. He attacked Denmark to gain the German-speaking territories of Schleswig-Holstein and two years later provoked Emperor Franz-Josef I into starting the Austro-Prussian War (1866), which ended in a swift defeat for the aging Austrian empire. At the time, Bismarck wisely declined to levy a war indemnity against the Austrians. Bismarck was less circumspect in his conduct of the Franco-Prussian War (1870-71). Seeing the opportunity to unify Germany’s loose confederations against an outside enemy, Bismarck stirred political tensions between France and Prussia, famously editing a telegram from William I to make both countries feel insulted by the other. The French declared war, but the Prussians and their German allies won handily. Prussia levied an indemnity, annexed the French border provinces of Alsace and Lorraine and crowned William emperor of a unified Germany (the Second Reich) in the Hall of Mirrors at Versailles—a tremendous insult to the French. With Germany unified, William I and Bismarck turned to entrenching their domestic power. For much of the 1870s Bismarck pursued a Kulturkampf (cultural struggle) against Catholics, who made up 36 percent of Germany’s population, by placing parochial schools under state control and expelling the Jesuits. In 1878 Bismarck relented, allying with the Catholics against the growing socialist threat.

In the 1880s Bismarck set aside his conservative impulses to counter the socialists by creating Europe’s first modern welfare state, establishing national healthcare (1883), accident insurance (1884) and old age pensions (1889). Bismarck also hosted the 1885 Berlin Conference that ended the “Scramble for Africa,” dividing the continent between the European powers and establishing German colonies in Cameroon, Togoland and East and Southwest Africa.

William I died in 1888 and was succeeded by his son Frederick III and then his grandson William II, both of whom Bismarck found difficult to control. In 1890 the new king forced Bismarck out. William II was left in control of a flourishing unified state but was ill-equipped to maintain Bismarck’s carefully manipulated balance of international rivalries. Respected and honored by the time of his death eight years later, Bismarck quickly became a quasi-mythic figure invoked by political leaders calling for strong German leadership—or for war.

The Times And Sunday Times Bestseller