The Conspirators of Abraham Lincoln’s Assassination, 1865 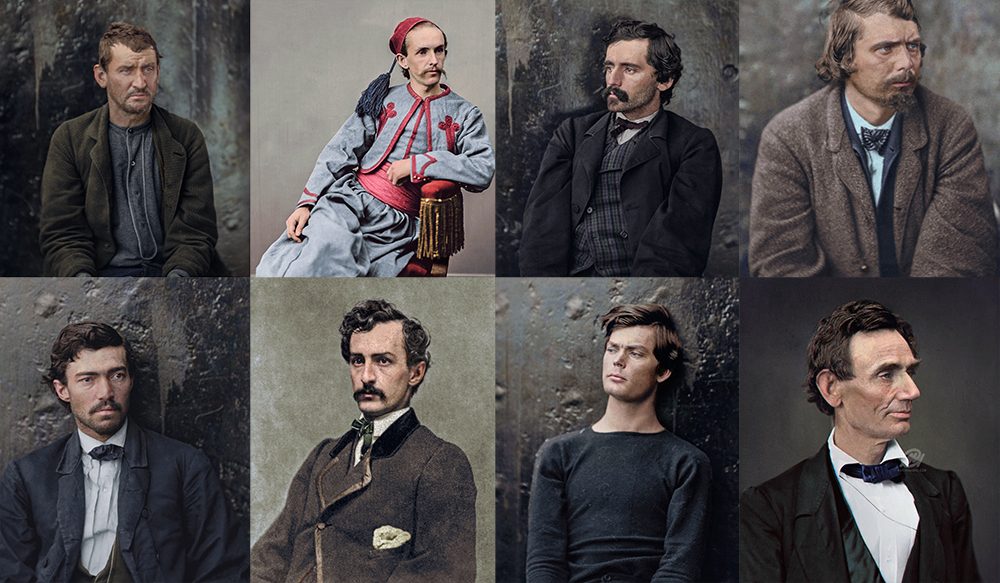 After the great success of the Lewis Powell portrait, I decided to colorize all conspirators of Abraham Lincoln’s assassination. Mary Surratt and Samuel Mudd are not included here because I could not find photos with the minimum quality requirements.

The assassination of Abraham Lincoln involves a gang of Confederate operatives and sympathizers that first plotted to kidnap the President and, when that failed, decided to murder not only him, but the Vice President and Secretary of State as well. Their goal was to decapitate and destabilize the federal government in hopes of forcing a settlement to the war that would avoid the South’s total defeat. In the end, they managed to kill Lincoln and seriously injure Secretary of State William Seward. •

A member of a famous acting family, and a fierce partisan of the Confederacy, Booth was the subject of a 12-day manhunt through Maryland and Virginia after he shot Lincoln at Ford’s Theatre. Union cavalry pursued him to the Garrett farm, burned down the barn to flush Booth out, then, as he rushed out, killed him with a bullet to the neck.

An impressionable and dull-witted pharmacy clerk, Herold led Booth on the escape route into Virginia. He surrendered at the Garrett farm, was tried and convicted, and was executed by hanging in July 1865.

German-born Azterodt was a carriage painter and boatman who had secretly ferried Confederate spies across Southern Maryland waterways during the war. Recruited by Booth into the conspiracy, he was assigned to kill Vice President Andrew Johnson, but lost his nerve and stayed in a hotel bar, drinking, instead. Azterodt was executed by hanging in July 1865.

Powell was a former Confederate prisoner of war. Tall and strong, he was recruited to provide the muscle for the kidnapping plot. When that plan failed, Booth assigned Powell to kill Secretary of State William Seward. He entered the Seward home and severely injured Seward, Seward’s son, and a bodyguard. Powell was tried and convicted, and was executed by hanging in July 1865.

Booth’s childhood friend was an ex-Confederate soldier. After he turned himself in to the authorities, he was tried as a conspirator, though his role remained unclear. O’Laughlen was sentenced to life in prison and sent to Fort Jefferson, off of Key West, Florida, where he died of yellow fever in 1867.

Another long-time friend of Booth, Arnold was not in Washington at the time of the assassination. However, investigators tied Arnold to Booth’s original kidnapping plot. Sentenced to life in prison, Arnold was pardoned by President Andrew Johnson, and survived until 1906, when he died of tuberculosis.

A stagehand and carpenter at Ford’s Theatre who was also known as Edward, Edmund, and Ned, Spangler knew Booth well and assisted him on April 14 at the theater. He was not connected to the kidnapping plan, but he was found guilty and sentenced to six years in prison. Pardoned by President Andrew Johnson in 1869, Spangler moved to Maryland, where he remained until his death in 1875.

Booth’s most valuable conspirator was a Confederate spy with a college education. Surratt introduced Booth to Herold and Azterodt, and conspired with the others to kidnap the president, but was not in Washington several months later when the assassination was carried out. Surratt fled the U.S. when he heard news of the crime, and lived in Europe as a fugitive for several years until he was apprehended in Egypt in 1866. Tried by a civilian court in 1867-1868, Surratt was not convicted. He would survive until 1916.

Captions provided by PBS, original photographs by Library Of Congress.
Special thanks to Dave, Lincoln assassination and Booth family researcher.

71st anniversary of the Hiroshima bombing