Tsar Nicholas II Of Russia And His Children With Cossack Officers Of The Konvoy, 1916 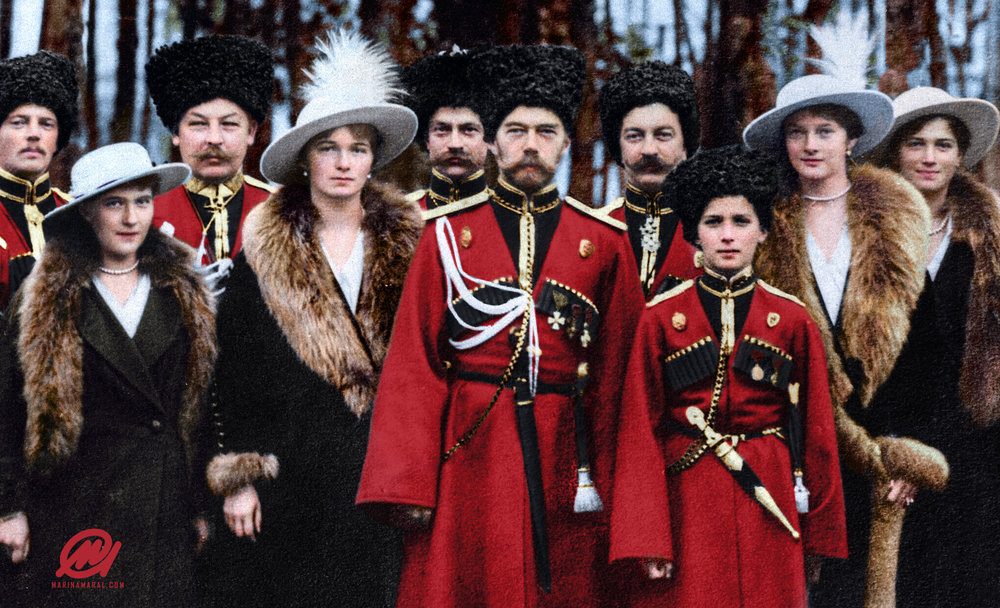 Tsar Nicholas II of Russia and his children with Cossack officers of the Konvoy (Grabbe, their commandant is seen between Anastasia and Olga) at GHQ Moginav (Mogilev), circa 1916.

Cossacks, a class of Eastern Slavic people that by the start of the 20th century numbered about 4 million, emerged in the 14th-15th centuries, forming democratic communities in the great river basins of what is now southern Russia and Ukraine. Since their early days they had maintained the traditions of military training in their families, were excellent horse riders and brave and skillful soldiers. By 1914, their loyalty to the authorities had been boosted by a preferential tax regime (they paid practically no taxes or levies), free education and health care. Yet the majority of ordinary Cossacks were rather poor. Their only source of income was land, which they either worked themselves or leased. However, land was often unfairly distributed by Cossack chieftains.

Cossack divisions, whose supreme commanders were called atamans, were one of the main pillars of Russia’s ruling regime. They were frequently used to disperse rallies and to suppress peasants and workers during the 1905 revolution. Yet some of the Cossacks refused to go against the people and protect landowners. Frustrated by their never-ending hardship, in some villages Cossacks even dared to rise against the authorities, but the outbreak of World War I changed everything.

The name of Cossack Kuzma Kryuchkov was to become known across the whole of Europe during the war. Kryuchkov, together with three fellow soldiers, killed a German cavalry platoon of 27 men, and became the first soldier in World War I to be awarded the Cross of St George, for “undaunted courage”. Overall, more than 120,000 Cossacks received different distinctions of St. George in the course of the war. In the meantime, villages left without a male workforce were slipping deeper into poverty. The authorities had completely lost the support of the Cossacks by the time the February 1917 revolution took place. A number of Cossack units that were sent to disperse the protesters not only refused to obey the command but joined in the uprising. In October 1917, the Bolsheviks overthrew the provisional government of Alexander Kerensky, and many Cossack units in St Petersburg went over to their side.

The revolution divided the Cossack people. Many poor Cossacks welcomed the first decrees of the new authorities: The Bolsheviks announced that Russia was quitting the war, promising land to the Cossacks and not to interfere in their affairs so long as they did not oppose Soviet rule. And yet it was in the very heart of Cossack Russia that the main hotbed of resistance to the new Soviet authorities was to emerge, on the banks of the river Don.

In 1918, General Pyotr Krasnov, who came from a generations-old Cossack family, became the Ataman, or commander, of the Don Cossack Host, a formidable independent Cossack army fighting on the side of “White Russia” against the Bolshevik authorities. Krasnov canceled Bolshevik decrees and declared the lands of the host an independent state with himself a dictator. From 25,000 to 40,000 “red” Cossacks were executed and another 30,000 exiled. Krasnov sent a telegram to Kaiser Wilhelm II, the German emperor, with an offer of cooperation in exchange for recognition of his “state”. Berlin sent Krasnov trainloads of weapons, but after Germany retreated, Krasnov’s “tsardom” broke up and he was forced to flee to Germany. By 1920, Cossack resistance was over.

The Bolsheviks began to exterminate Cossacks, seeing them as a class hostile to the Soviet authorities. Many were executed, while whole families were banished from their land and exiled to other territories in order to “dilute” the Cossacks’ social unity. In 1922, the lands belonging to Cossack hosts were absorbed into the Soviet republics of Russia and Ukraine. However, this was far from the end of the Cossacks.