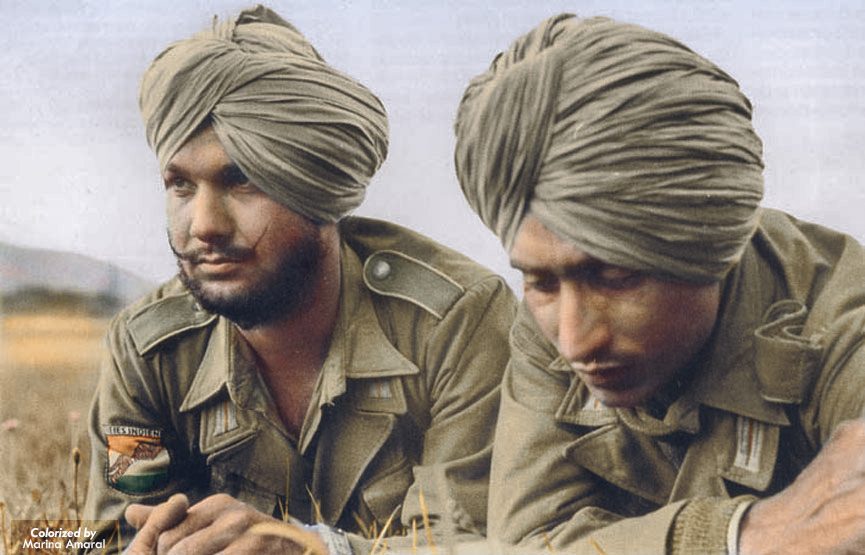 More than 2.5 million Indian soldiers fought in the 2nd World War. While the overwhelming majority of them fought for the British in the name of ‘King and the Empire’; a significant number of Indians heeded the call of Subhas Chandra Bose and fought against the British Empire and the allies for the liberation of India.

The soldiers under the leadership of Subhas Chandra Bose not only fought in the Burma and South East Asian Campaigns but were also involved in the European Theatre of war in the 2nd World War. At least 3000 Indian soldiers were organized into an armed brigade under the German Wehrmacht in 1942 and they were known as the Free Indian Legion (Legion Freies Indien).While, the sacrifices of the soldiers of INA in Burma are widely recognized in India, the story of these soldiers of Free Indian legion in Europe is not as widely known.

The Indian Legion (German: Indische Legion), officially the Free India Legion (German: Legion Freies Indien) or Infantry Regiment 950 (Indian) (German: Infanterie-Regiment 950 (indisches), I.R. 950) and later the Indian Volunteer Legion of the Waffen-SS (German: Indische Freiwilligen Legion der Waffen-SS), was a military unit raised during World War II in Nazi Germany. Intended to serve as a liberation force for British-ruled India, it was made up of Indian prisoners of war and expatriates in Europe. Because of its origins in the Indian independence movement, it was known also as the “Tiger Legion”, and the “Azad Hind Fauj”. Initially raised as part of the German Army, it was part of the Waffen-SS from August 1944. Indian independence leader Subhas Chandra Bose initiated the legion’s formation, as part of his efforts to win India’s independence by waging war against Britain, when he came to Berlin in 1941 seeking German aid. The initial recruits in 1941 were volunteers from the Indian students resident in Germany at the time, and a handful of the Indian prisoners of war who had been captured during the North Africa Campaign. It would later draw a larger number of Indian prisoners of war as volunteers.

Though it was initially raised as an assault group that would form a pathfinder to a German-Indian joint invasion of the western frontiers of British India, only a small contingent was ever put to its original intended purpose. A hundred legionnaires were parachuted into eastern Iran under Operation Bajadere and infiltrated into Baluchistan Province to undertake sabotage operations, which they reportedly did successfully, but with insignificant effect. A small contingent, including much of the Indian officer corps and enlisted leadership, was transferred to the Indian National Army in south-east Asia. The majority of the troops of the Indian Legion were only ever stationed in Europe in non-combat duties, in the Netherlands, and in France until the Allied invasion. They saw action in the retreat from the Allied advance across France, fighting mostly against the French Resistance. One company was sent to Italy in 1944, where it saw action against British and Polish troops and undertook anti-partisan operations.

At the time of the surrender of Nazi Germany in 1945, the remaining men of the Indian Legion made efforts to march to neutral Switzerland over the Alps, but these efforts proved futile as they were captured by American and French troops and eventually shipped back to India to face charges of treason. Because of the uproar the trials of Indians who served with the Axis caused among civilians and the military of British India, the legion members’ trials were not completed. The Legion is not to be confused with Bose’s Indian National Army aligned with the Japanese in Burma.