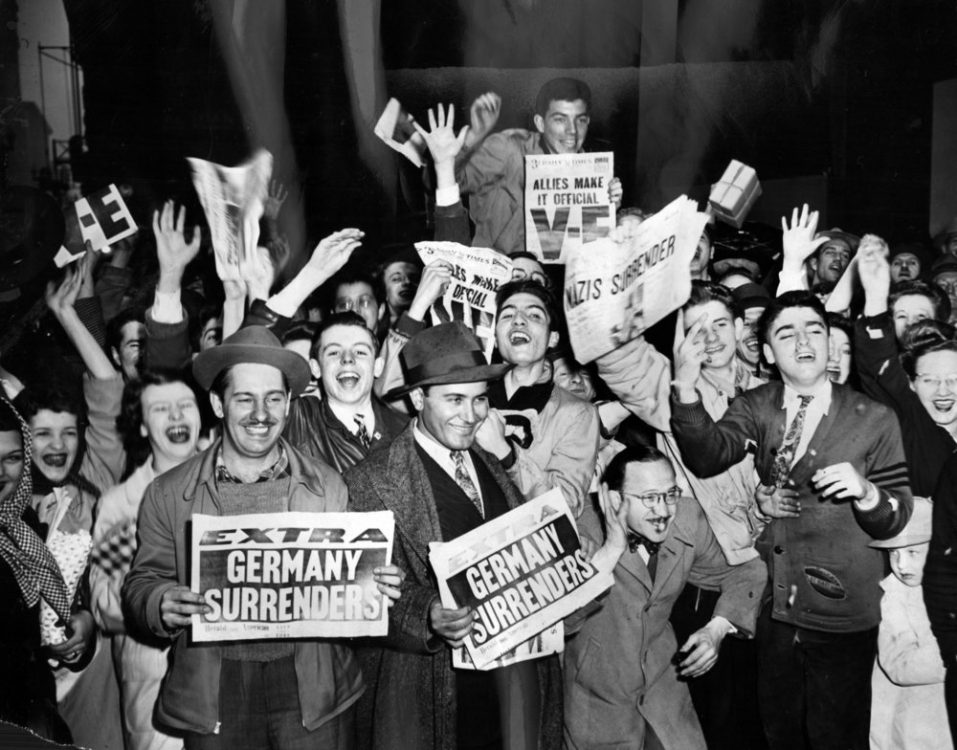 Victory in Europe Day, generally known as V-E Day, VE Day or simply V-Day, is the public holiday celebrated on 8 May 1945 to mark the formal acceptance by the Allies of World War II of Nazi Germany’s unconditional surrender of its armed forces.

The term VE Day existed as early as September 1944, in anticipation of victory. On 30 April 1945, Adolf Hitler, the Nazi leader, committed suicide during the Battle of Berlin. Germany’s surrender, therefore, was authorized by his successor, Reichspräsident Karl Dönitz. The administration headed by Dönitz was known as the Flensburg Government. The act of military surrender was signed on 7 May in Reims, France and on 8 May in Berlin, Germany.

Upon the defeat of Germany, celebrations erupted throughout the world. From Moscow to Los Angeles, people celebrated.

In the United Kingdom, more than one million people celebrated in the streets to mark the end of the European part of the war. In London, crowds massed in Trafalgar Square and up the Mall to Buckingham Palace, where King George VI and Queen Elizabeth, accompanied by Prime Minister Winston Churchill, appeared on the balcony of the palace before the cheering crowds. Princess Elizabeth (the future Queen Elizabeth II) and her sister Princess Margaret were allowed to wander incognito among the crowds and take part in the celebrations.

In the United States, the victory happened on President Harry Truman’s 61st birthday. He dedicated the victory to the memory of his predecessor, Franklin D. Roosevelt, who had died of a cerebral hemorrhage less than a month earlier, on the 12th of April. Flags remained at half-staff for the remainder of the 30-day mourning period. Truman said of dedicating the victory to Roosevelt’s memory and keeping the flags at half-staff that his only wish was “that Franklin D. Roosevelt had lived to witness this day.” Later that day, Truman said that the victory made it his most enjoyable birthday.

In color | Faces of Slavery