Witold Pilecki: Meet the man who sneaked into Auschwitz 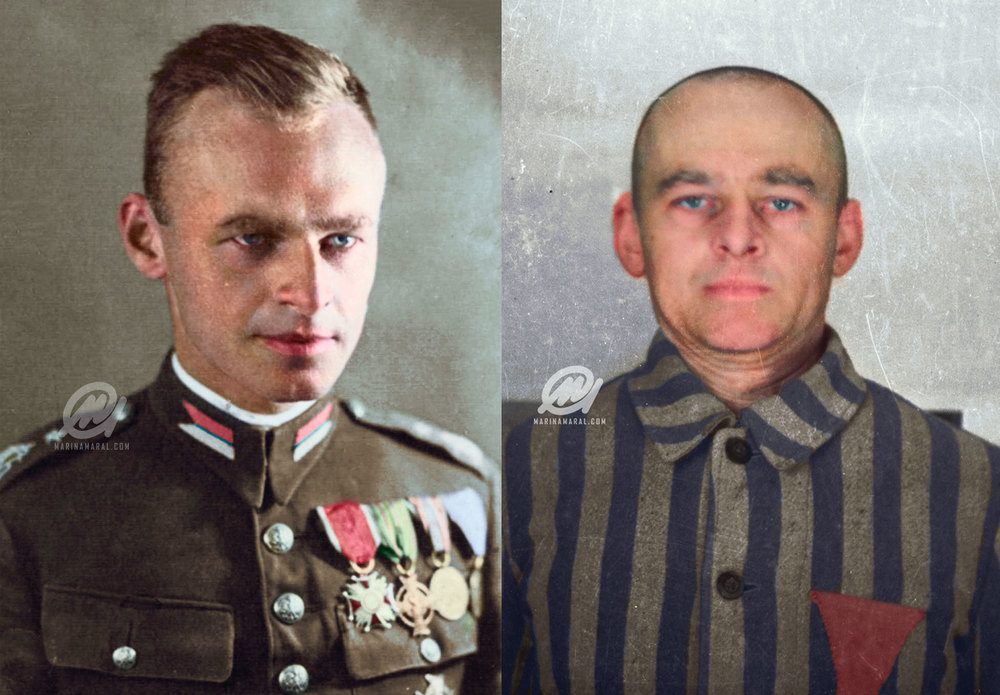 This is the story of a Polish army captain named Witold Pilecki. In September 1940, Pilecki didn’t know exactly what was going on in Auschwitz, but he knew someone had to find out. He would spend two and a half years in the prison camp, smuggling out word of the methods of execution and interrogation. He would eventually escape and author the first intelligence report on the camp.

Witold Pilecki (13 May 1901 – 25 May 1948; Polish pronunciation: [ˈvitɔlt piˈlɛt͡skʲi]; codenames Roman Jezierski, Tomasz Serafiński, Druh, Witold) was a Polish soldier, a rittmeister of the Polish Cavalry during the Second Polish Republic, the founder of the Secret Polish Army (Tajna Armia Polska) resistance group in German-occupied Poland in November 1939, and a member of the underground Home Army (Armia Krajowa), which was formed in February 1942. He was the author of Witold’s Report, the first comprehensive Allied intelligence report on Auschwitz concentration camp and the Holocaust. During World War II, he volunteered for a Polish resistance operation to get imprisoned in the Auschwitz death camp in order to gather intelligence and escape. While in the camp, Pilecki organized a resistance movement and as early as 1941, informed the Western Allies of Nazi Germany’s Auschwitz atrocities. He escaped from the camp in 1943 after nearly two and a half years of imprisonment. Pilecki took part in the Warsaw Uprising in August 1944. He remained loyal to the London-based Polish government-in-exile after the Soviet-backed communist takeover of Poland and was arrested in 1947 by the Stalinist secret police (Urząd Bezpieczeństwa) on charges of working for “foreign imperialism”, thought to be a euphemism for MI6. He was executed after a show trial in 1948. Until 1989, information about his exploits and fate was suppressed by the Polish communist regime.

As a result of his deeds, he is considered as “one of the greatest wartime heroes”. In the foreword to the book The Auschwitz Volunteer: Beyond Bravery Michael Schudrich, the Chief Rabbi of Poland, wrote as follows: “When God created the human being, God had in mind that we should all be like Captain Witold Pilecki, of blessed memory.” In the introduction to that book Norman Davies, a British historian, wrote: “If there was an Allied hero who deserved to be remembered and celebrated, this was a person with few peers.” At the commemoration event of International Holocaust Remembrance Day held in the US Holocaust Memorial Museum on 27 January 2013 Ryszard Schnepf, the Polish Ambassador to the US, described Pilecki as a “diamond among Poland’s heroes” and “the highest example of Polish patriotism”.

Shortly before the outbreak of World War II, on 26 August 1939, Pilecki was mobilized as a cavalry platoon commander. He was assigned to the 19th Infantry Division under Józef Kwaciszewski, part of the Polish Army Prusy. His unit took part in heavy fighting against the advancing Germans during the invasion of Poland and was partially destroyed. Pilecki’s platoon withdrew to the southeast, toward Lwów (now L’viv, in Ukraine) and the Romanian bridgehead, and was incorporated into the recently formed 41st Infantry Division, in which he served as divisional second-in-command under Major Jan Włodarkiewicz. Pilecki and his men destroyed seven German tanks, shot down one aircraft, and destroyed two more on the ground. On 17 September, the Soviet Union invaded eastern Poland pursuant to the Molotov-Ribbentrop Pact. Involved in more heavy fighting on two fronts, Pilecki’s division was disbanded by 22 September, parts of it surrendering to their enemies. Pilecki returned to Warsaw with his commander, Major Włodarkiewicz.

On 9 November 1939, the two men founded the Secret Polish Army (Tajna Armia Polska, TAP), one of the first underground organizations in Poland. Pilecki became organizational commander of TAP as it expanded to cover not only Warsaw, but Siedlce, Radom, Lublin, and other major cities of central Poland. By 1940, TAP had approximately 8,000 men (more than half of them armed), some 20 machine guns and several anti-tank rifles. Later, the organization was incorporated into the Union for Armed Struggle (Związek Walki Zbrojnej), later renamed and better known as the Home Army (Armia Krajowa, or AK). Within the AK, TAP elements became the core of the Wachlarz unit.

In 1940, Pilecki presented to his superiors a plan to enter Germany’s Auschwitz concentration camp at Oświęcim (the Polish name of the locality), gather intelligence on the camp from the inside and organize inmate resistance. Until then, little had been known about how the Germans ran the camp, and it was thought to be an internment camp or large prison rather than a death camp. His superiors approved the plan and provided him with a false identity card in the name of “Tomasz Serafiński”. On 19 September 1940, he deliberately went out during a Warsaw street roundup (łapanka) and was caught by the Germans, along with some 2,000 civilians (among them, Władysław Bartoszewski). After two days of detention in the Light Horse Guards Barracks, where prisoners suffered beatings with rubber truncheons,[16] Pilecki was sent to Auschwitz and was assigned inmate number 4859.

At Auschwitz, while working in various kommandos and surviving pneumonia, Pilecki organized an underground Union of Military Organizations (Związek Organizacji Wojskowej, ZOW). Many smaller underground organizations at Auschwitz eventually merged with ZOW. ZOW’s tasks were to improve inmate morale, provide news from outside, distribute extra food and clothing to members, set up intelligence networks and train detachments to take over the camp in the event of a relief attack by the Home Army, arms airdrops or an airborne landing by the Polish 1st Independent Parachute Brigade based in Britain.

ZOW provided the Polish underground with invaluable information about the camp. From October 1940, ZOW sent reports to Warsaw, and beginning in March 1941, Pilecki’s reports were being forwarded via the Polish resistance to the British government in London. In 1942, Pilecki’s resistance movement was also broadcasting details on the number of arrivals and deaths in the camp and the inmates’ conditions using a radio transmitter that was built by camp inmates. The secret radio station, built over seven months using smuggled parts, was broadcasting from the camp until the autumn of 1942, when it was dismantled by Pilecki’s men after concerns that the Germans might discover its location because of “one of our fellow’s big mouth”. These reports were a principal source of intelligence on Auschwitz for the Western Allies. Pilecki hoped that either the Allies would drop arms or troops into the camp or that the Home Army would organize an assault on it from outside. Such plans, however, were all judged impossible to carry out. Meanwhile, the Gestapo redoubled its efforts to ferret out ZOW members, succeeding in killing many of them. Pilecki decided to break out of the camp with the hope of convincing Home Army leaders personally that a rescue attempt was a valid option. When he was assigned to a night shift at a camp bakery outside the fence, he and two comrades overpowered a guard, cut the phone line and escaped on the night of 26/27 April 1943, taking with them documents stolen from the Germans.

After several days, Pilecki made contact with Home Army units. On 25 August 1943, Pilecki reached Warsaw and joined the Home Army’s intelligence department. The Home Army, after losing several operatives in reconnoitering the vicinity of the camp, including the Cichociemny Stefan Jasieński, decided that it lacked sufficient strength to capture the camp without Allied help. Pilecki’s detailed report (Raport Witolda – Witold’s Report) estimated that “By March 1943 the number [of people gassed on arrival] reached 1.5 million.”.

The Home Army decided that it did not have enough force to storm the camp by itself. In 1944, the Russian army, despite being within attacking distance of the camp, showed no interest in a joint effort with the Home Army and the ZOW to free it. Until he became involved in the Warsaw Uprising, Pilecki remained in charge of coordinated ZOW and AK activities and provided what limited support he was able to offer to ZOW. On 23 February 1944, Pilecki was promoted to cavalry captain (rotmistrz) and joined a secret anti-communist organization, NIE (in Polish: “NO or NIEpodległość – INdependence”), formed as a secret organization within the Home Army with the goal of preparing resistance against a possible Soviet occupation.

When the Warsaw Uprising broke out on 1 August 1944, Pilecki volunteered for the Kedyw’s Chrobry II group and fought in “Mazur” platoon, 1st company “Warszawianka” of the National Armed Forces. At first, he fought in the northern city center as a simple private, without revealing his actual rank. Later, as many officers fell, he disclosed his true identity and accepted command. His forces held a fortified area called the “Great Bastion of Warsaw”. It was one of the most outlying partisan redoubts and caused considerable difficulties for German supply lines. The bastion held for two weeks in the face of constant attacks by German infantry and armor. On the capitulation of the uprising, Pilecki hid some weapons in a private apartment and went into captivity. He spent the rest of the war in German prisoner-of-war camps at Łambinowice and Murnau.