In color | The Cologne Cathedral 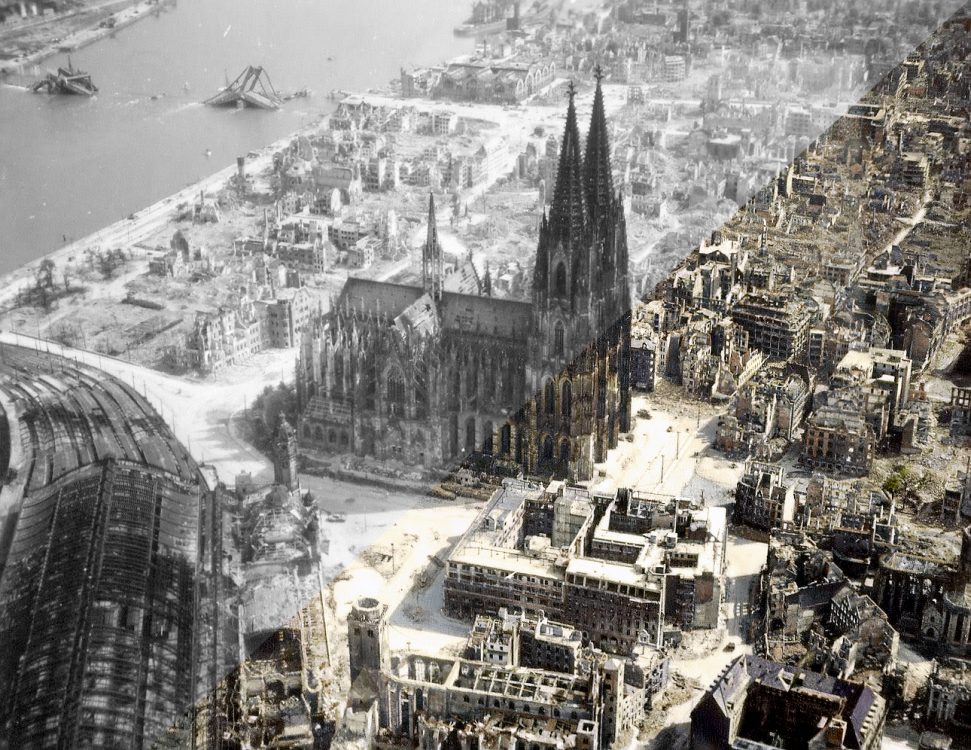 Cologne Cathedral is a Catholic cathedral in Cologne, North Rhine-Westphalia, Germany. It is a renowned monument of German Catholicism and Gothic architecture and was declared a World Heritage Site in 1996. The Cathedral is also Germany’s most visited landmark, attracting an average of 20,000 people a day, and currently the tallest twin-spired church at 157 m (515 ft) tall, second in Europe after Ulm Minster and third in the world. Construction of Cologne Cathedral began in 1248 but was halted in 1473, unfinished. Work did not restart until the 1840s, and the edifice was completed to its original Medieval plan in 1880.

On 6 March 1945, an area west of the cathedral (Marzellenstrasse/Trankgasse) was the site of intense combat between American tanks of the 3rd Armored Division and a Panther Ausf. A of Panzer brigade 106 Feldherrnhalle. The Panther successfully knocked out a Sherman, killing three men, before it was destroyed by a T26E3 Pershing hours later. Footage of that battle survives. The destroyed Panther was later put on display at the base of the cathedral for the remainder of the war in Europe. Repairs of the war damage were completed in 1956. An emergency repair to the base of the northwest tower, carried out in 1944 using poor-quality brick taken from a nearby ruined building, remained visible as a reminder of the war until 2005, when it was decided to restore the section to its original appearance.

Repair and maintenance work is constantly being carried out in one or another section of the building, which is rarely completely free of scaffolding, as wind, rain, and pollution slowly eat away at the stones. The Dombauhütte, established to build the cathedral and keep it in repair, is said to employ the best stonemasons in the Rhineland. Half the costs of repair and maintenance are still borne by the Dombauverein. (Source: Wiki)