In color | John F. Kennedy and Jacqueline Bouvier on their wedding day 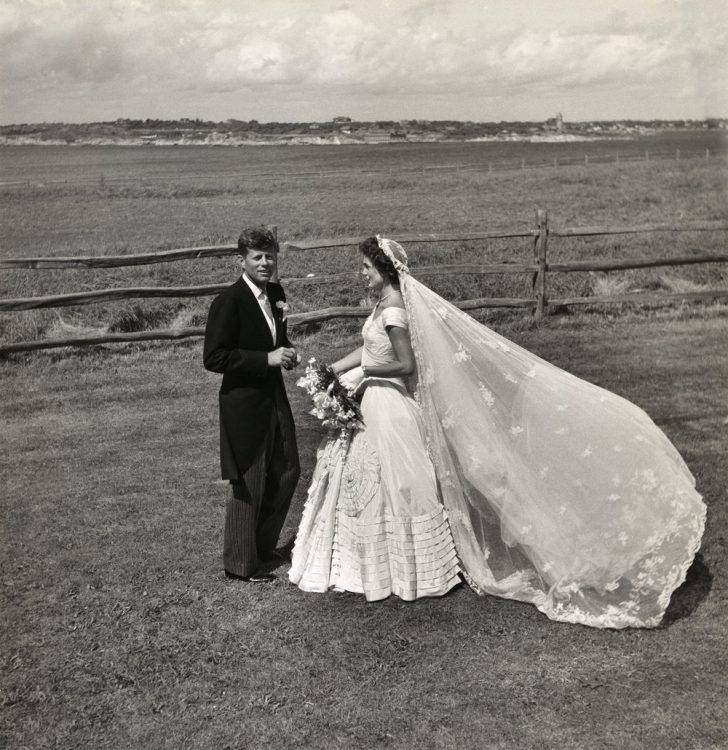 The wedding was celebrated at St Mary’s Roman Catholic Church in Newport, Rhode Island, on a crisp, sunny day. A breeze whipped up whitecaps in the bay as waves of publicity powered by the groom’s father, Ambassador Joseph P. Kennedy, drew crowds to the streets. It was he who had picked out Jacqueline Bouvier as the right wife for a future president of the United States, and he is said to have run the whole event like a Hollywood production. The bride was twenty-four and the groom, United States Senator John F. Kennedy of Massachusetts, was thirty-six. She had warmed to her prospective father-in-law personally, and to his money, but friends said she was nervous of marrying a confirmed philanderer and of being swamped by his boisterous family.

Both bride and groom were Catholics. Her step-family, the Auchinclosses, were Protestants, but Janet Auchincloss’s pleas for the ceremony not to be ‘too Catholic’ were brushed aside. So were her requests for a reasonably limited guest list. The Kennedys treated the wedding as a political event and the hundreds of guests included senators and congressmen, Boston and Massachusetts political figures and Hollywood luminaries. Ambassador Kennedy had enlisted Cardinal Cushing, Archbishop of Boston, to conduct the nuptial mass (only because the Pope was not available, it was said). The groom arrived with a scratched face after being knocked into a rosebush in a last-minute game of touch football with his brothers and the ushers. His best man was his brother Bobby.

The bride’s adored father, ‘Black Jack’ Bouvier, who was supposed to lead her proudly down the aisle, was found drunk in his suite in the Viking Hotel at ten that morning. He was discreetly shipped back to New York in an ambulance and his place was taken by Jackie’s stepfather, Hugh Auchincloss. Inquisitive reporters were told that poor ‘Black Jack’ had been suddenly stricken with flu. When Jackie arrived at the church for the 11am ceremony, the crowd across the street surged forward and almost swamped her. Her off-the-shoulder gown, which she disliked intensely, was made of fifty yards of ivory silk taffeta. Her younger sister Lee was matron of honour and the eleven bridesmaids were in pink taffeta.

The reception was at an Auchincloss residence, Hammersmith Farm, where Jackie and Jack stood in the receiving line for three hours to greet the 1,300 guests. Opportunities for political gladhanding were fully exploited. The ambassador’s glamorous ex-mistress Gloria Swanson did not crash the party, as the womenfolk of both families had feared. After champagne, lunch, speeches and dancing, the bride and groom left for a short honeymoon in Acapulco. The media coverage was extremely satisfactory. The tragedy lay ten years ahead.

In color | Thomas Edison relaxing on a “Vagabonds” camping trip, 1921