Article | When Past and Present Collide 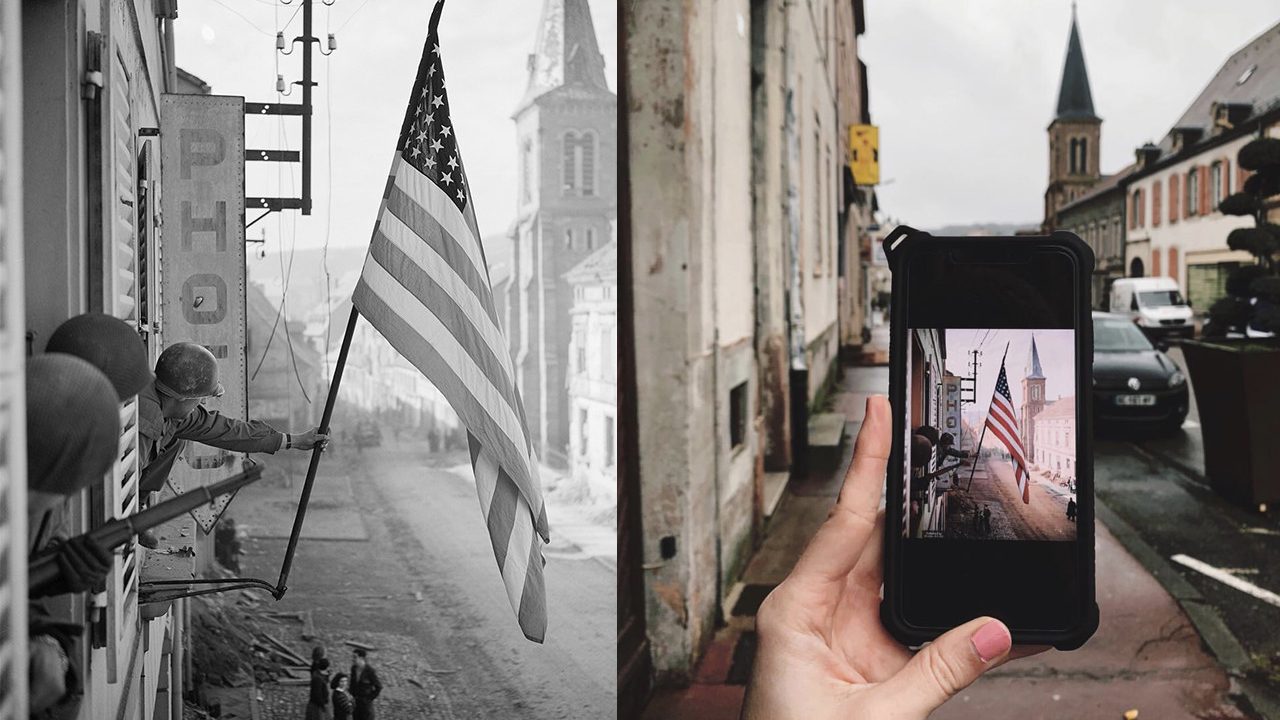 Colorizing photos is a lonely process. Before I even begin the colorization itself, I spend hours – or even days – reading, researching, studying, and finding stories. It is time-consuming, sometimes emotionally draining, but just as enjoyable. My work gave me the opportunity to meet incredible people: teachers, renowned historians, authors; and some became close friends. But, even though all these encounters mean a lot to me, none of them are or were able to prepare me for the moments when I have the opportunity to talk to relatives of people portrayed in the photos that I colorized. It is as if those “historical personalities” – strangers who become so close to me, in a weird way, since I spend so many hours in “their company”, restoring and applying colors to their faded photos – jump off the screen and materialize in front of me. I cannot describe the feeling. This is what happened when Frank Garahan, son of Captain Thomas H. Garahan – portrayed in one of the dozens of World War II photos that I restored, and which soon became one of my favorites – got in touch via Twitter.

When war broke out, Thomas H. Garahan was 28 years old, married for two years with one daughter, Kathy, and his wife, Kate, pregnant with their second child. He was older than most of his troops, had completed officer training and reached the rank of Captain in the 398th Regiment, Company E. Writing letters to Kate was a habit he practiced whenever possible, and fortunately, Kate saved all of his correspondence while overseas.

We left the States Oct.6th and landed at Marseille October 22nd. We came over in convoy, the 100th – 103rd-and 12th Armored Division. (…) The first few days of the voyage were beautiful and calm, but about the fifth day out we ran into a blow. It was a full scale North Atlantic gale. We tossed about for three days until it finally blew itself out! There were seasick guys everywhere but I didn’t miss a meal. (We were only fed twice a day, breakfast and supper). It cleared up beautifully before we sighted land. Our first glimpse of terra firma was the African coast; we sailed up it and into the Mediterranean. It was at dusk that we sighted Gibraltar- a really breath-taking sight. We slid by it and awoke the next morning to find ourselves in the blue Mediterranean waters. We again stuck to the African coast for a while until nearly opposite Marseille, when we swung north. We were now entering the airplane danger zone because Italian based German planes were attacking Shipping in that part of the Mediterranean. But as it turned out we had little to fear then, because a hell of a storm sprung up and no planes could fly, and some storm it was!, even worse than the Atlantic version. The same guys were violently ill all over again. But the wind had blown good as well as evil and we arrived in port unscathed. There are lots of details that I could add to this short account, but the biggest one was the fact that I was beginning to learn how much I could miss a person, and how miserable and lonely and frustrated a fellow could be away from the one he loved with only a 50-50 chance of getting back.

A few days later, Tom continued his account of the 100th Division’s arrival in France in October of 1944 in a letter to Kate.

”Would you like to hear some more about the 100th’s hegira? Here goes- We pulled into the port of Marseille October 22nd. The convoy was fairly large and only a few ships could be unloaded at one time because of the damage which had been done to the docks by our air corps before the 7th Army invaded southern France, or by the Germans before they withdrew. Traditionally, the ships were unloaded in order of their Commander’s rank. Fortunately our Captain was third or fourth ranking man, so we didn’t have too long to wait before our turn came. We marched down the gangplank with all our belongings on our backs in enormous full field packs weighing about 60 pounds each. We filed between a throng of GI onlookers on either side of us who hooted at us derisively making insulting remarks about us individually and collectively and telling us that our clean uniform and equipment would be soon dirty and torn. We did our best to ignore them, formed up and marched off. We were heading for concentration areas outside the city where we were to be processed. We had no idea how far they were. (…) We were just leaving the city and dusk was settling when suddenly all the searchlight batteries in the city lit up the sky and the ack-ack guns started spitting. A lone German bomber had slipped over from Italy to raid the harbor area. It was our first taste of that thrilling but nauseating reaction to combat. Of course, we were in no danger at the time, but we didn’t know that and everyone felt sure that we were going to be bombed and strafed. We suddenly realized that there was a war going on.”

After reading these letters (quite a few times, I imagine) and his father’s raw first-person accounts, Frank decided to embark on a journey and retrace his footsteps: “In 2015, I began to contemplate a trip that would retrace the entire combat tour of my father and the 100th Infantry Division in 1944-1945. I made several earlier trips to Germany and France and have even been to Bitche, France in 2005. To accomplish an accurate retracement I would need to employ different modes of travel along the way: air travel across the Atlantic Ocean instead of sailing, but beyond that, I was as precise as possible in sticking to the actual route.”

You can read his entire description of the journey here, but I’d like to focus on a particular bit to explain how our worlds collided – Mine, Captain Garahan’s and Frank’s – so many decades later.

On December 13, Tom’s company is part of a crushing offensive against unrelenting German positions as recorded in the History of the 398th Regiment:

German resistance had become increasingly evident as we approached the gates to Bitche. Artillery fire was heavier and curtains of automatic fire screened strongpoints and towns. At the slightest provocation, the Germans poured in artillery. For the next two days, the Regiment moved with caution as it jockeyed into position for the attack on Reyersviller. Then suddenly on 13 December like a cloudburst, the 398th swept in upon Reyersviller behind a rolling barrage of artillery fire from the 375th Field Artillery Battalion. With the 2d Battalion in the lead, pillboxes and strongpoints, which only a short time ago were spitting fire and raking the terrain before them, were blasted open. The Krauts who could, came stumbling out to surrender. The battalion continued on to the high ground north of Reyersviller with Company F being the first unit of the 100th Division to reach the Maginot Line and come under the fire of its heavy guns. Outside of the town, the Regiment dug in before the divisional objective, Bitche.

Tom’s action on December 13-14 earns him the award of the Bronze Star Medal. On March 16th at 7:30 am, E Company, followed by the second battalion, entered the streets of Bitche. The townspeople quickly became aware that liberation was at hand. Among the first to greet the troops was George Oblinger, innkeeper and proprietor of Auberge le Strasbourg. He brought out the American flag that his wife Maria had secretly created and presented it to Captain Thomas H. Garahan.

Soon after receiving the flag, Tom, with a few members of his company, took it to a second-floor apartment above a shop, just a few doors away. A war correspondent photographer was present and took the photo. And this is where I enter the story.

Letter from Tom to Kate, April 4, 1945, Germany: About all that publicity, I was absolutely flabbergasted to learn that the picture had been sent out. Evidently, it was printed all over the US because fellows from all parts of the country are receiving copies of it from hometown papers. Guess the shot of the flag made it newsworthy. That flag had been hidden in a pillowcase for two years under the noses of the Germans, awaiting the advent of the Americans. It was the first one to be flown in the town and was the signal for scores of French flags to be dug out of hiding and displayed. Being the first ones in that place was quite a thrill, especially because it had never been taken in the history of warfare.

I colorized the original black and white photograph back in 2016, when a fellow colorist, Doug Banks, sent it over. That photo means so much to me that it has become a habit to republish it every year on my social media channels. This is what I did yesterday, December 13th 2020, not knowing what would happen a few hours later.

I have so much to tell you about the story and your involvement in the history. Please reach out to me to let me know how to share. Thank you for all you have done. Frank

I was ecstatic. As soon as I saw the tweet, I sent a private message to Frank, and he explained how he first came across the colorized photograph: “The short version is our family was always enamored with the photo but our father rarely spoke about it. After he died in 1988 we engaged his troops at reunions and when you colorized the photo it brought new life to the event and I became determined to learn more. This led to my trip and how the town has embraced your artwork as the most important milestone of the legacy of a history going back centuries. You should be so proud of your contribution to the history of Bitche France.”

So I told Frank that after a week in which I let the imposter syndrome take over a few times, his message was everything I needed. I think the word here is serendipity. People often say that my work transforms lives. I dare to contest and say that I am the one who undergoes a profound transformation every time I have the privilege of hearing and telling these stories. If there is someone who spends a lot of time immersed in the past, it is me, but now I know that sometimes when past and present collide, amazing things can happen.