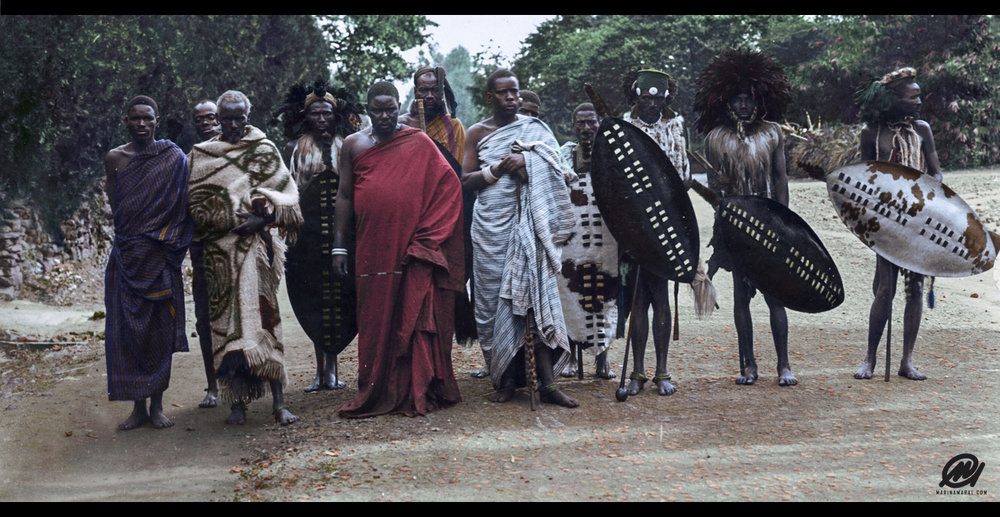 The Ngoni people (also called Angoni) are an ethnic group living in Malawi, Mozambique, Tanzania and Zambia, in southeast-central Africa. The Ngoni trace their origins to the Nguni and Zulu people of kwaZulu-Natal in South Africa. The displacement of the Ngoni people in the great scattering following the Zulu wars had repercussions in social reorganization as far north as Malawi and Zambia.

The rise of the Zulu nation to dominance in southern Africa in the early nineteenth century (~1815–~1840) disrupted many traditional alliances. Around 1817, the Mthethwa alliance, which included the Zulu clan, came into conflict with the Ndwandwe alliance, which included the Nguni people from the kwaZulu-Natal. One of the military commanders of the Ndwandwe army, Zwangendaba Gumbi (c1780–1848), was the head of the Jele or Gumbi clan, which itself formed part of the larger emaNcwangeni alliance in what is now north-east kwaZulu-Natal. In 1819, the Zulu army under Shaka defeated the Ndwandwe alliance at a battle on the Umhlatuze River, near Nkandla. The battle resulted in the diaspora of many indigenous groups in southern Africa.

In the following decades, Zwangendaba led a small group of his followers north through Mozambique and Zimbabwe to the region around the Viphya Plateau. In this region, present-day Zambia (Chipata district), Malawi (Mzimba, Ntcheu and Karonga district) and Tanzania (Matema district), he established a state, using Zulu warfare techniques to conquer and integrate local peoples. The date on which Zwengandaba’s party crossed the River Zambezi, sometimes given in early writings as 1825, has been argued to have been on 20 November 1835.

Following Zwangendaba’s death in 1848, succession disputes split the Ngoni people. Zwangendaba’s following and the Maseko Ngoni eventually created seven substantial Ngoni kingdoms in Tanzania, Zambia and Malawi. While the Ngoni were primarily agriculturalists, cattle were their main goal for raiding expeditions and migrations northward. Their reputation as refugees escaping Shaka is easily overstated; it is thought that no more than 1,000 Ngoni crossed the Zambezi River in the 1830s. They raided north, taking women in marriage and men into their fighting regiments. Their prestige became so great that by 1921, in Nyasaland alone, 245,833 people claimed membership as Ngoni although few spoke the Zulu dialect called Ngoni.

The Ngoni integrated conquered subjects into their warfare and organization, becoming more a ruling class than an ethnic group, and by 1906 few individuals were of pure Ngoni descent. It was only after Ngoni status began to decline that tribal consciousness of the component groups began to rise along with their reported numbers. In the early 1930s, the Ngonde, Nyasa, Tonga and other groups once again claimed their original tribal status.
While the Ngoni have generally retained a distinct identity in the post-colonial states in which they live, integration and acculturation has led to them adopting local languages; nowadays Zulu is used only for a few ritual praise poems.

Editor’s Choice, The Bookseller: The Colour Of Time