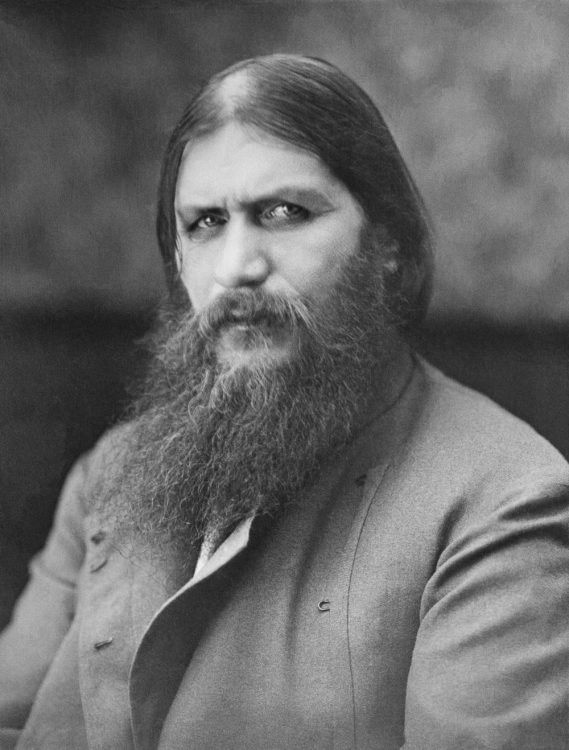 Rasputin, a wondering peasant who eventually exerted a powerful influence over Nicholas II and Aleksandra, the last Tsar and Tsarina of Imperial Russia, is one of the most mysterious and dark individuals of Russian history.

Born to a Siberian peasant family, Grigori Yefimovich Rasputin received little schooling and probably never learned to read or write. In his early years, some people of his village said he possessed supernatural powers, while others cite examples of extreme cruelty. For a time, it was believed his name “Rasputin” meant “licentious” in Russian. Historians now believe that “Rasputin” meant “where two rivers meet,” a phrase that describes an area near where he was born in Siberia. He entered the Verkhoture Monastery in Russia with the intention of becoming a monk, but left shortly thereafter, presumably to get married. At age 19, he wed Proskovia Fyodorovna, and they later had three children (two others died shortly after birth). In his early 20s, however, Rasputin left his family and traveled to Greece and the Middle East, making several pilgrimages to the Holy Land.

In 1903, Rasputin’s wanderings brought him to St. Petersburg, where he arrived with a reputation as a mystic and faith healer. Two years later, he was introduced to Russian Czar Nicholas II and his wife, Alexandra Feodorovna, who were seeking help for their sickly son, Alexis. Rasputin quickly gained their confidence by seemingly “curing” the boy of hemophilia. This action won him the passionate support of Alexandra. Between 1906 and 1914, various politicians and journalists used Rasputin’s association with the imperial family to undermine the dynasty’s credibility and push for reform. Rasputin helped their efforts by claiming to be the Czarina’s advisor, and accounts of his rampant lascivious behavior emerged in the press, compounding contempt among state officials. In truth, however, Rasputin’s influence at this time was limited to the health of Alexis. As Russia entered World War I, Rasputin predicted that calamity would befall the country. Nicholas II took command of the Russian Army in 1915, and Alexandra took responsibility for domestic policy. Always Rasputin’s defender, she dismissed ministers who were said to be suspicious of the “mad monk.” Government officials tried to warn her of Rasputin’s undue influence, but she continued to defend him, giving the impression that Rasputin was her closest advisor.

On the night of December 29, 1916, a group of conspirators, including the czar’s first cousin, Grand Duke Dmitri Pavlovich, and Prince Felix Yusupov, invited Rasputin to Yusupov’s palace and fed him wine and cakes laced with cyanide. Though Rasputin eventually became rather drunk, the poison seemed to have no effect. Baffled but not deterred, the conspirators finally shot Rasputin multiple times. He was then wrapped in a carpet and thrown into the Neva River, where it was discovered three days later.

Although Rasputin was gone, the last of his prophecies was yet to unfold. Shortly before his death, he wrote to Nicholas to predict that if he were killed by government officials, the entire imperial family would be killed by the Russian people. His prophecy came true 15 months later, when the czar, his wife and all of their children were murdered by assassins amidst the Russian Revolution.