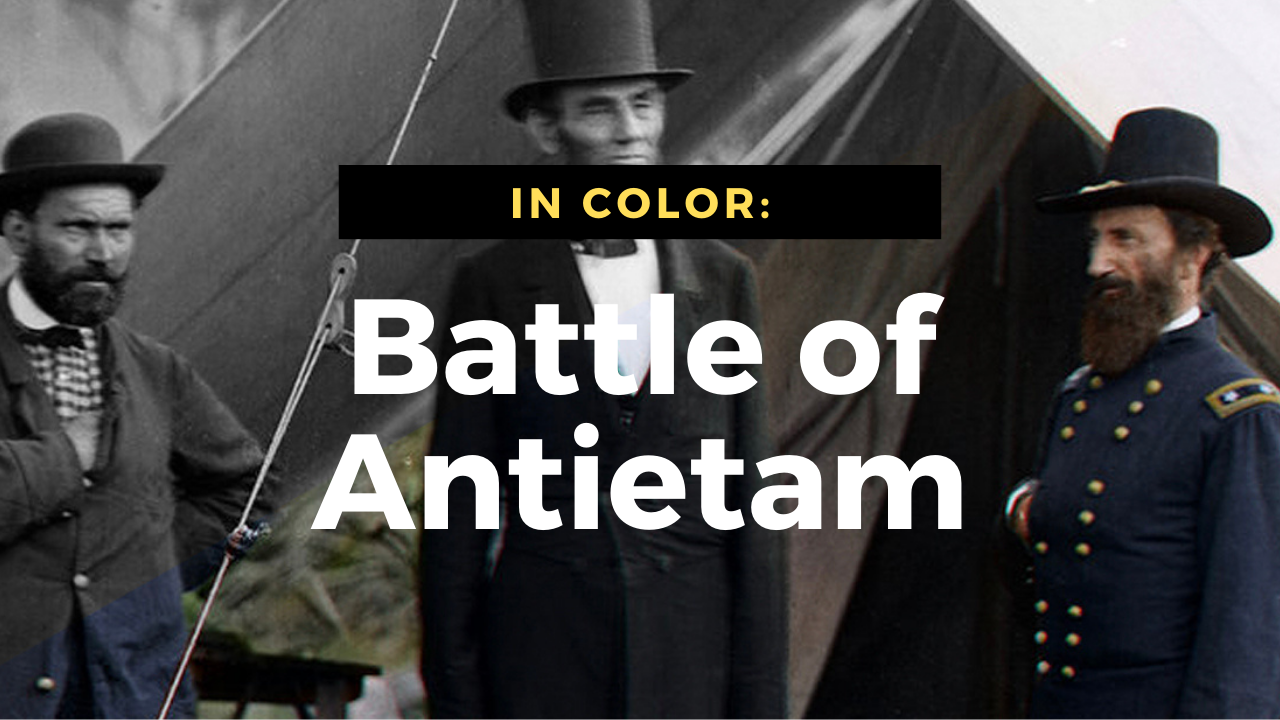 The Battle of Antietam was a battle of the American Civil War, fought on September 17, 1862, between Confederate Gen. Robert E. Lee’s Army of Northern Virginia and Union Gen. George B. McClellan’s Army of the Potomac, near Sharpsburg, Maryland and Antietam Creek. Part of the Maryland Campaign, it was the first field army–level engagement in the Eastern Theater of the American Civil War to take place on Union soil. It was the bloodiest day in American history, with a combined tally of 22,717 dead, wounded, or missing.

After pursuing Confederate Gen. Robert E. Lee into Maryland, Maj. Gen. George B. McClellan of the Union Army launched attacks against Lee’s army, in defensive positions behind Antietam Creek. At dawn on September 17, Maj. Gen. Joseph Hooker’s corps mounted a powerful assault on Lee’s left flank. Attacks and counterattacks swept across Miller’s Cornfield, and fighting swirled around the Dunker Church. Union assaults against the Sunken Road eventually pierced the Confederate center, but the Federal advantage was not followed up. In the afternoon, Union Maj. Gen. Ambrose Burnside’s corps entered the action, capturing a stone bridge over Antietam Creek and advancing against the Confederate right. At a crucial moment, Confederate Maj. Gen. A. P. Hill’s division arrived from Harpers Ferry and launched a surprise counterattack, driving back Burnside and ending the battle. Although outnumbered two-to-one, Lee committed his entire force, while McClellan sent in less than three-quarters of his army, enabling Lee to fight the Federals to a standstill. During the night, both armies consolidated their lines. In spite of crippling casualties, Lee continued to skirmish with McClellan throughout September 18, while removing his battered army south of the Potomac River.

Despite having superiority of numbers, McClellan’s attacks failed to achieve force concentration. This allowed Lee to counter by shifting forces and moving along interior lines to meet each challenge. This is why McClellan failed to destroy Lee’s army even though he had ample reserve forces that he could have deployed to exploit localized successes. McClellan persisted in his erroneous belief that he was outnumbered. This contributed to his cautiousness throughout the campaign.

McClellan had halted Lee’s invasion of Maryland, but his army had suffered the heavier losses, and Lee was able to withdraw his army back to Virginia without interference. McClellan’s refusal to pursue Lee’s army led to his removal from command by President Abraham Lincoln in November. Although the battle was tactically inconclusive, the Confederate troops had withdrawn first from the battlefield and abandoned their invasion, making it a Union strategic victory. It was enough of a victory to give Lincoln the confidence to announce his Emancipation Proclamation, which, by freeing more than 3.5 million slaves in the Confederate states, began the process of emancipation of all remaining persons considered, legally, as slaves within the United States, and in doing so, discouraged the British and French governments, which were strongly opposed to slavery, and had in fact abolished slavery prior to the American Civil War, from recognizing the Confederacy. (source: Wiki)