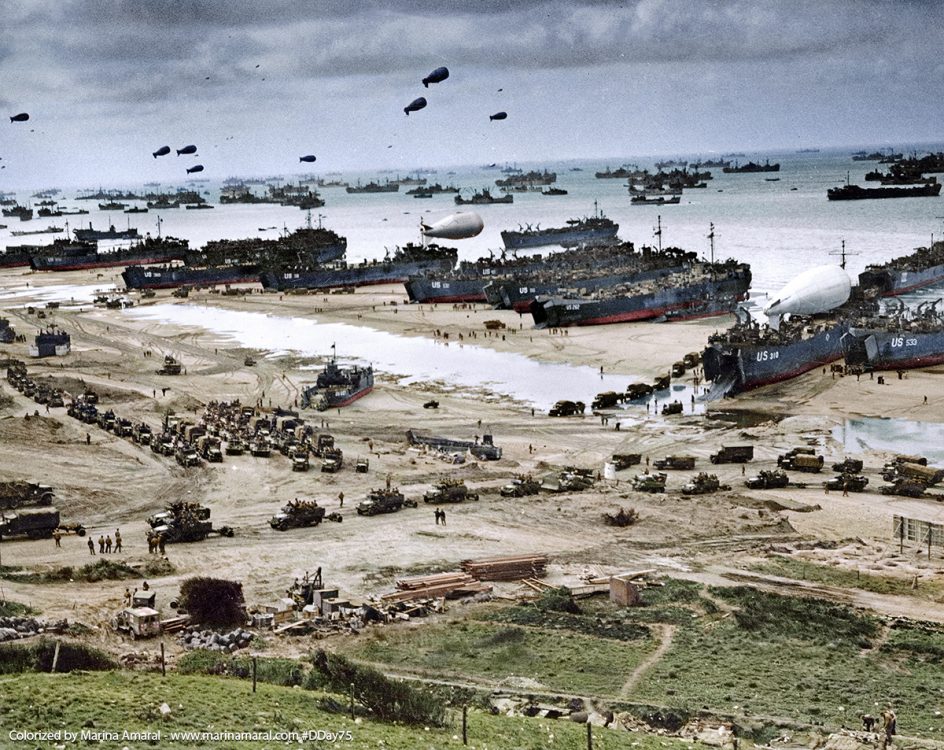 The Normandy landings were the landing operations on Tuesday, 6 June 1944 of the Allied invasion of Normandy in Operation Overlord during World War II. Codenamed Operation Neptune and often referred to as D-Day, it was the largest seaborne invasion in history. The operation began the liberation of German-occupied France (and later Europe) from Nazi control, and laid the foundations of the Allied victory on the Western Front.

Planning for the operation began in 1943. In the months leading up to the invasion, the Allies conducted a substantial military deception, codenamed Operation Bodyguard, to mislead the Germans as to the date and location of the main Allied landings. The weather on D-Day was far from ideal and the operation had to be delayed 24 hours; a further postponement would have meant a delay of at least two weeks as the invasion planners had requirements for the phase of the moon, the tides, and the time of day that meant only a few days each month were deemed suitable. Adolf Hitler placed German Field Marshal Erwin Rommel in command of German forces and of developing fortifications along the Atlantic Wall in anticipation of an Allied invasion.

The amphibious landings were preceded by extensive aerial and naval bombardment and an airborne assault—the landing of 24,000 US, British, and Canadian airborne troops shortly after midnight. Allied infantry and armored divisions began landing on the coast of France at 06:30.

Men of the 16th Infantry Regiment, US 1st Infantry Division wade ashore on Omaha Beach on the morning of 6 June 1944.

The US airborne landings began with the arrival of pathfinders at 00:15. Navigation was difficult because of a bank of thick cloud, and as a result, only one of the five paratrooper drop zones was accurately marked with radar signals and Aldis lamps. Paratroopers of the US 82nd and 101st Airborne Divisions, numbering over 13,000 men, were delivered by Douglas C-47 Skytrains of the IX Troop Carrier Command. To avoid flying over the invasion fleet, the planes arrived from the west over the Cotentin Peninsula and exited over Utah Beach.

Troops from the 101st Airborne with full packs and a bazooka, in a C-47 just before take-off from RAF Upottery Airfield to Normandy, France for “Operation Chicago. June 5, 1944.

Paratroops from 101st Airborne were dropped beginning around 01:30, tasked with controlling the causeways behind Utah Beach and destroying road and rail bridges over the Douve River. The C-47s could not fly in a tight formation because of thick cloud cover, and many paratroopers were dropped far from their intended landing zones. Many planes came in so low that they were under fire from both flak and machine gun fire. Some paratroopers were killed on impact when their parachutes did not have time to open, and others drowned in the flooded fields. Gathering together into fighting units was made difficult by a shortage of radios and by the bocage terrain, with its hedgerows, stone walls, and marshes. Some units did not arrive at their targets until afternoon, by which time several of the causeways had already been cleared by members of the 4th Infantry Division moving up from the beach.

British paratroops of the 6th Airborne Division aboard an aircraft en route to their drop site during the D-Day Invasion of Normandy, World War II, June 6, 1944.

The first Allied action of D-Day was Operation Deadstick, a glider assault at 00:16 at Pegasus Bridge over the Caen Canal and the bridge (since renamed Horsa Bridge) over the Orne, half a mile (800 meters) to the east. Both bridges were quickly captured intact, with light casualties, by members of the 5th Parachute Brigade and the 7th (Light Infantry) Parachute Battalion. The five bridges over the Dives were destroyed with minimal difficulty by the 3rd Parachute Brigade. Meanwhile, the pathfinders tasked with setting up radar beacons and lights for further paratroopers (scheduled to begin arriving at 00:50 to clear the landing zone north of Ranville) were blown off course and had to set up the navigation aids too far east. Many paratroopers, also blown too far east, landed far from their intended drop zones; some took hours or even days to be reunited with their units. Major General Richard Gale arrived in the third wave of gliders at 03:30, along with equipment, such as antitank guns and jeeps, and more troops to help secure the area from counter-attacks, which were initially staged only by troops in the immediate vicinity of the landings. At 02:00, the commander of the German 716th Infantry Division ordered Feuchtinger to move his 21st Panzer Division into position to counter-attack. However, as the division was part of the armored reserve, Feuchtinger was obliged to seek clearance from OKW before he could commit his formation. Feuchtinger did not receive orders until nearly 09:00, but in the meantime, on his own initiative, he put together a battle group (including tanks) to fight the British forces east of the Orne.

German soldiers near the town of Pointe du Hoc, about 6.5 km west of Omaha Beach, are taken prisoner by US troops.

Only 160 men out of the 600 members of the 9th Battalion tasked with eliminating the enemy battery at Merville arrived at the rendezvous point. Lieutenant Colonel Terence Otway, in charge of the operation, decided to proceed regardless, as the emplacement had to be destroyed by 06:00 to prevent it firing on the invasion fleet and the troops arriving on Sword Beach. In the Battle of Merville Gun Battery, Allied forces disabled the guns with plastic explosives at a cost of 75 casualties. The emplacement was found to contain 75 mm guns rather than the expected 150 mm heavy coastal artillery. Otway’s remaining force withdrew with the assistance of a few members of the 1st Canadian Parachute Battalion.

With this action, the last of the D-Day goals of the British 6th Airborne Division was achieved. They were reinforced at 12:00 by commandos of the 1st Special Service Brigade, who landed on Sword Beach, and by the 6th Airlanding Brigade, who arrived in gliders at 21:00 in Operation Mallard.

The target 50-mile (80 km) stretch of the Normandy coast was divided into five sectors: Utah, Omaha, Gold, Juno, and Sword. Strong winds blew the landing craft east of their intended positions, particularly at Utah and Omaha. The men landed under heavy fire from gun emplacements overlooking the beaches, and the shore was mined and covered with obstacles such as wooden stakes, metal tripods, and barbed wire, making the work of the beach-clearing teams difficult and dangerous.

U.S. troops use a lifeline to rescue several men from a landing craft that was sunk by enemy fire on D-Day, June 6, 1944.

Casualties were heaviest at Omaha, with its high cliffs. Problems clearing the beach of obstructions led to the beachmaster calling a halt to further landings of vehicles at 08:30. A group of destroyers arrived around this time to provide fire support so landings could resume. Exit from the beach was possible only via five heavily defended gullies, and by late morning barely 600 men had reached the higher ground.

With anguish and exhaustion on their faces, American soldiers solemnly recover the dead on Omaha Beach after June 6, 1944.

The Allies failed to achieve any of their goals on the first day. Carentan, St. Lô, and Bayeux remained in German hands, and Caen, a major objective, was not captured until 21 July. Only two of the beaches (Juno and Gold) were linked on the first day, and all five beachheads were not connected until 12 June; however, the operation gained a foothold which the Allies gradually expanded over the coming months.

Soldiers, Sailors, and Airmen of the Allied Expeditionary Force: You are about to embark upon the Great Crusade, toward which we have striven these many months. The eyes of the world are upon you. The hopes and prayers of liberty-loving people everywhere march with you. In company with our brave Allies and brothers-in-arms on other Fronts you will bring about the destruction of the German war machine, the elimination of Nazi tyranny over oppressed peoples of Europe, and security for ourselves in a free world. Your task will not be an easy one. Your enemy is well trained, well equipped, and battle-hardened. He will fight savagely. But this is the year 1944. Much has happened since the Nazi triumphs of 1940-41. The United Nations have inflicted upon the Germans great defeats, in open battle, man-to-man. Our air offensive has seriously reduced their strength in the air and their capacity to wage war on the ground. Our Home Fronts have given us an overwhelming superiority in weapons and munitions of war, and placed at our disposal great reserves of trained fighting men. The tide has turned. The free men of the world are marching together to victory. I have full confidence in your courage, devotion to duty, and skill in battle. We will accept nothing less than full victory. Good Luck! And let us all beseech the blessing of Almighty God upon this great and noble undertaking.
-Dwight D. Eisenhower

Special thanks to Erik Villard, Military Historian for the US Army;
and to the US National Archives.