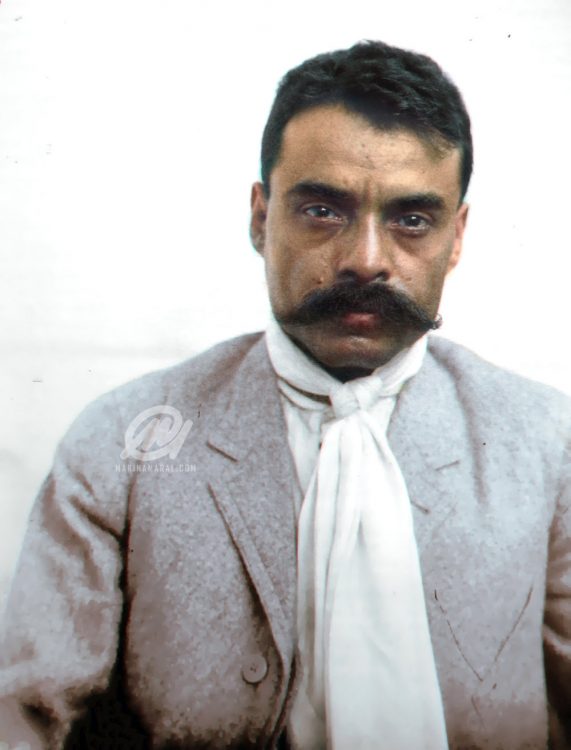 Emiliano Zapata Salazar (8 August 1879 – 10 April 1919) was a leading figure in the Mexican Revolution, the main leader of the peasant revolution in the state of Morelos, and the inspiration of the agrarian movement called Zapatismo.

Zapata was born in the rural village of Anenecuilco in Morelos State, where peasant communities were under increasing pressure from the small landowning class who monopolized land and water resources for sugar cane production with the support of dictator Porfirio Díaz. Zapata early on participated in political movements against Diaz and the landowning hacendados, and when the Revolution broke out in 1910 he was positioned as a central leader of the peasant revolt in Morelos.

Cooperating with a number of other peasant leaders he formed the Liberation Army of the South of which he soon became the undisputed leader. Zapata’s forces contributed to the fall of Díaz, defeating the Federal Army in the Battle of Cuautla, but when the revolutionary leader Francisco I. Madero became president he disavowed the role of the Zapatistas, denouncing them as simple bandits. In November 1911, Zapata promulgated the Plan de Ayala which called for substantial land reforms, redistributing lands to the peasants. Madero sent the Federal Army to root out the Zapatistas in Morelos. Madero’s generals employed a scorched earth policy, burning villages and forcibly removing their inhabitants, and drafting many men into the Army or sending them to forced labor camps in Southern Mexico. This strengthened Zapata’s standing among the peasants and Zapata was able to drive the forces of Madero led by Victoriano Huerta out of Morelos. In a coup against Madero in February 1913, Huerta took power in Mexico, but a coalition of Constitutionalist forces in Northern Mexico led by Venustiano Carranza, Álvaro Obregón and Francisco Villa ousted him in July 1914 with the support of Zapata’s troops. Zapata did not recognize the authority that Carranza asserted as leader of the revolutionary movement, continuing his adherence to the Plan of Ayala.

In the aftermath of the revolutionaries’ victory over Huerta, they attempted to sort out power relations in the Convention of Aguascalientes. Zapata and Villa broke with Carranza; and Mexico descended into civil war among the winners. Dismayed with the alliance with Villa, Zapata focused his energies on rebuilding society in Morelos which he now controlled, instituting the land reforms of the Plan de Ayala. As Carranza consolidated his power and defeated Villa in 1915, Zapata initiated guerrilla warfare against the Carrancistas, who in turn invaded Morelos, employing once again scorched earth tactics to oust the Zapatista rebels. Zapata once again retook Morelos in 1917 and held most of the state against Carranza’s troops until he was killed in an ambush in April 1919.

After his death, Zapatista generals aligned with Obregón against Carranza and helped drive Carranza from power. In 1920, Zapatistas managed to obtain powerful posts in the governance of Morelos after Carranza’s fall. They instituted many of the land reforms envisioned by Zapata in Morelos.

Zapata remains an iconic figure in Mexico, used both as a nationalist symbol as well as a symbol of the neo-Zapatista movement.

In color | Nazi General Anton Dostler before his execution, 1945