In color | Nazi General Anton Dostler before his execution, 1945 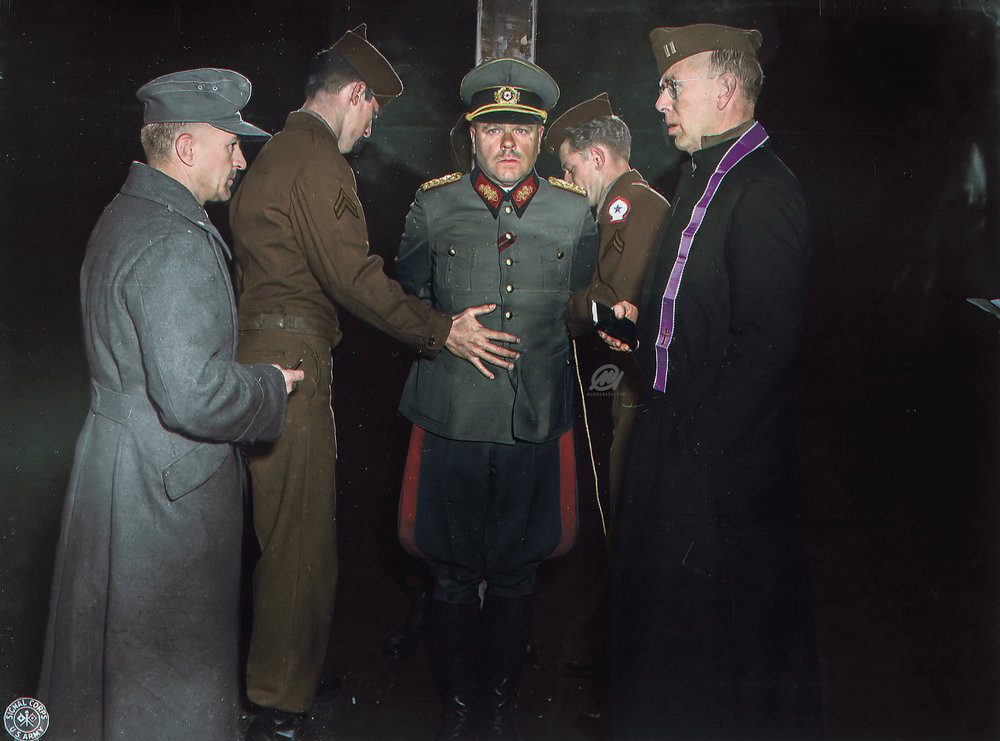 General Anton Dostler was a general of the infantry in the regular German Army during World War II. In the first Allied war trial after the war, Dostler was found guilty of war crimes and executed by firing squad.

He ordered and oversaw the unlawful execution of fifteen captured U.S. soldiers. The soldiers were sent behind the German lines with orders to demolish a tunnel that was being used by the German army as a supply route to the front lines. They were captured and upon learning of their mission, Dostler ordered their execution without trial. The U.S. soldiers were wearing proper military uniforms and carried no civilian or enemy clothing and were in compliance with Hague Convention to be considered non-combatants after their surrender. Under the 1907 Hague Convention on Land Warfare, it was legal to execute “spies and saboteurs” disguised in civilian clothes or enemy uniforms but excluded those who were captured in proper uniforms. Since fifteen U.S. soldiers were properly dressed in U.S. uniforms behind enemy lines and not disguised in civilian clothes or enemy uniforms, they were not to be treated as spies but prisoners of war, which Dostler violated. This order was an implementation of Hitler’s secret Commando Order of 1942, which required the immediate execution without trial of commandos and saboteurs.

German officers at the 135th Fortress Brigade contacted Dostler in an attempt to achieve a delay of their execution. Dostler sent another telegram ordering Almers to carry out the execution. Two last attempts were made by the officers at the 135th to stop the execution, including some by telephone, because they knew that executing uniformed prisoners of war was a direct violation of the 1929 Geneva Convention on Prisoners of War. These efforts were unsuccessful and the 15 Americans were executed on the morning of March 26, 1944, at Punta Bianca south of La Spezia, in the municipality of Ameglia. Their bodies were buried in a mass grave that was then camouflaged.

In the first Allied War crimes trial, Anton Dostler was accused of carrying out an illegal order. In his defense, Dostler maintained that he had not issued the order, but had only passed along an order to Colonel Almers from supreme command, and that the execution of the OSS men was a lawful reprisal. Dostler’s plea of superior orders failed because by ordering the execution, he had acted on his own outside the Führer’s order.

The general was convicted and sentenced to death by the American Military Tribunal. He was executed by a 12-man firing squad on December 1, 1945 in Aversa. The execution was photographed on black and white still and movie cameras (video from the execution). Immediately after the execution Dostler’s body was lifted onto a stretcher, shrouded inside a white cotton mattress cover and driven away in an army truck. His remains were buried in Grave 93/95 of Section H at Pomezia German War Cemetery.