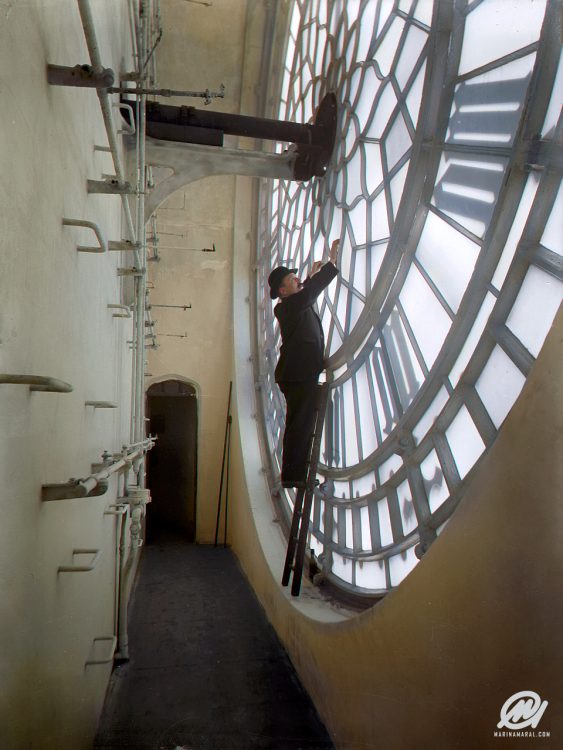 Big Ben is the nickname for the Great Bell of the clock at the north end of the Palace of Westminster in London and is usually extended to refer to both the clock and the clock tower as well. The tower is officially known as Elizabeth Tower, renamed to celebrate the Diamond Jubilee of Elizabeth II in 2012; previously, it was known simply as the Clock Tower.

The Elizabeth Tower was raised as a part of Charles Barry’s design for a new palace, after the old Palace of Westminster was largely destroyed by fire on the night of 16 October 1834. The new parliament was built in a neo-gothic style. Although Barry was the chief architect of the palace, he turned to Augustus Pugin for the design of the clock tower, which resembles earlier Pugin designs, including one for Scarisbrick Hall in Lancashire. The design for the tower was Pugin’s last design before his final descent into madness and death, and Pugin himself wrote, at the time of Barry’s last visit to him to collect the drawings: “I never worked so hard in my life for Mr Barry for tomorrow I render all the designs for finishing his bell tower & it is beautiful.” The tower is designed in Pugin’s celebrated Gothic Revival style, and is 315 feet (96.0 m) high.

Despite being one of the world’s most famous tourist attractions, the interior of the tower is not open to overseas visitors, though United Kingdom residents are able to arrange tours (well in advance) through their Member of Parliament. However, the tower currently has no lift, though one is planned, so those escorted must climb the 334 limestone stairs to the top.

Due to changes in ground conditions since construction, the tower leans slightly to the northwest, by roughly 230 millimeters (9.1 in) over 55 m height, giving an inclination of approximately 1/240. This includes a planned maximum of 22 mm increased tilt due to tunneling for the Jubilee line extension. Due to thermal effects, it oscillates annually by a few millimeters east and west.

Journalists during Queen Victoria’s reign called it St Stephen’s Tower. As MPs originally sat at St Stephen’s Hall, these journalists referred to anything related to the House of Commons as news from “St. Stephens” (the Palace of Westminster contains a feature called St Stephen’s Tower, a smaller tower over the public entrance). The usage persists in Welsh, where the Westminster district, and Parliament by extension, is known as San Steffan.

On 2 June 2012, The Daily Telegraph reported that 331 Members of Parliament, including senior members of all three main parties, supported a proposal to change the name from Clock Tower to Elizabeth Tower in tribute to Queen Elizabeth II in her Diamond Jubilee year. This was thought to be appropriate because the large west tower now known as Victoria Tower was renamed in tribute to Queen Victoria on her Diamond Jubilee. On 26 June 2012, the House of Commons confirmed that the name change could go ahead. The Prime Minister, David Cameron, announced the change of name on 12 September 2012 at the start of Prime Minister’s Questions. The change was marked by a naming ceremony in which the Speaker of the House of Commons, John Bercow, unveiled a name plaque attached to the tower on the adjoining Speaker’s Green.