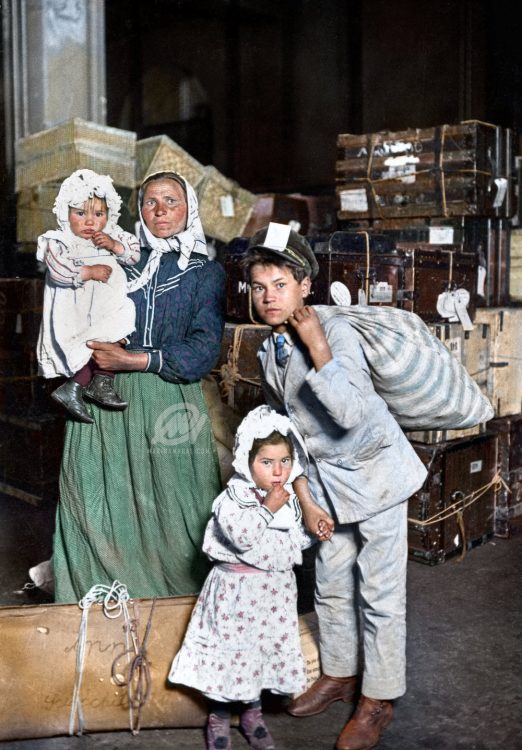 Ellis Island, in Upper New York Bay, was the gateway for over 12 million immigrants to the United States as the nation’s busiest immigrant inspection station for over sixty years from 1892 until 1954. The island was greatly expanded with land reclamation between 1892 and 1934. Before that, the much smaller original island was the site of Fort Gibson and later a naval magazine. The island was made part of the Statue of Liberty National Monument in 1965, and has hosted a museum of immigration since 1990.

In the 35 years before Ellis Island opened, more than eight million immigrants arriving in New York City had been processed by New York State officials at Castle Garden Immigration Depot in Lower Manhattan, just across the bay. The federal government assumed control of immigration on April 18, 1890, and Congress appropriated $75,000 to construct America’s first federal immigration station on Ellis Island. Artesian wells were dug, and landfill was hauled in from incoming ships’ ballast and from construction of New York City’s subway tunnels, which doubled the size of Ellis Island to over six acres. While the building was under construction, the Barge Office nearby at the Battery was used for immigrant processing.

The first station was an enormous three-story-tall structure, with outbuildings, built of Georgia pine, containing all of the amenities that were thought to be necessary. It opened with celebration on January 1, 1892. Three large ships landed on the first day and 700 immigrants passed over the docks. Almost 450,000 immigrants were processed at the station during its first year. On June 15, 1897, a fire of unknown origin, possibly caused by faulty wiring, turned the wooden structures on Ellis Island into ashes. No loss of life was reported, but most of the immigration records dating back to 1855 were destroyed. About 1.5 million immigrants had been processed at the first building during its five years of use. Plans were immediately made to build a new, fireproof immigration station on Ellis Island. During the construction period, passenger arrivals were again processed at the Barge Office.

The present main structure was designed in French Renaissance Revival style and built of red brick with limestone trim. After it opened on December 17, 1900, the facilities proved to be able to barely handle the flood of immigrants that arrived in the years before World War I. Writer Louis Adamic came to America from Slovenia , then part of the Austro-Hungarian Empire in 1913 and described the night he and many other immigrants slept on bunk beds in a huge hall. Lacking a warm blanket, the young man “shivered, sleepless, all night, listening to snores” and dreams “in perhaps a dozen different languages”. The facility was so large that the dining room could seat 1,000 people. It is reported that the island’s first immigrant to be processed through was a teenager named Annie Moore from County Cork in Ireland.

After its opening, Ellis Island was again expanded with landfill and additional structures were built. By the time it closed on November 12, 1954, twelve million immigrants had been processed by the U.S. Bureau of Immigration. It is estimated that 10.5 million immigrants departed for points across the United States from the Central Railroad of New Jersey Terminal, located just across a narrow strait. Others would have used one of the other terminals along the North River (Hudson River) at that time. At first, the majority of immigrants arriving through the station were Northern and Western Europeans (Germany, Ireland, Britain and the Scandinavian countries). Eventually, these groups of peoples slowed in the rates that they were coming in, and immigrants came in from Southern and Eastern Europe, including Jews. Many reasons these immigrants came to the United States included escaping political and economic oppression, as well as persecution, destitution, and violence. Other groups of peoples being processed through the station were Poles, Hungarians, Czechs, Serbs, Slovaks, Greeks, Syrians, Turks, and Armenians.

Between 1905 and 1914, an average of one million immigrants per year arrived in the United States. Immigration officials reviewed about 5,000 immigrants per day during peak times at Ellis Island. Two-thirds of those individuals emigrated from eastern, southern and central Europe. The peak year for immigration at Ellis Island was 1907, with 1,004,756 immigrants processed. The all-time daily high occurred on April 17, 1907, when 11,747 immigrants arrived. After the Immigration Act of 1924 was passed, which greatly restricted immigration and allowed processing at overseas embassies, the only immigrants to pass through the station were those who had problems with their immigration paperwork, displaced persons, and war refugees. Today, over 100 million Americans—about one-third to forty percent of the population of the United States—can trace their ancestry to the immigrants who first arrived in America at Ellis Island before dispersing to points all over the country.

Generally, those immigrants who were approved spent from two to five hours at Ellis Island. Arrivals were asked 29 questions including name, occupation, and the amount of money carried. It was important to the American government that the new arrivals could support themselves and have money to get started. The average the government wanted the immigrants to have was between 18 and 25 dollars ($600 in 2015 adjusted for inflation). Those with visible health problems or diseases were sent home or held in the island’s hospital facilities for long periods of time. More than three thousand would-be immigrants died on Ellis Island while being held in the hospital facilities. Some unskilled workers were rejected because they were considered “likely to become a public charge.” About 2 percent were denied admission to the U.S. and sent back to their countries of origin for reasons such as having a chronic contagious disease, criminal background, or insanity. Ellis Island was sometimes known as “The Island of Tears” or “Heartbreak Island” because of those 2% who were not admitted after the long transatlantic voyage. The Kissing Post is a wooden column outside the Registry Room, where new arrivals were greeted by their relatives and friends, typically with tears, hugs and kisses.

The first immigrant to pass through Ellis Island was Annie Moore, a 17-year-old girl from Cork, Ireland, who arrived on the ship Nevada on January 1, 1892. She and her two brothers were coming to America to meet their parents, who had moved to New York two years prior. She received a greeting from officials and a $10 gold coin. It was the largest sum of money she had ever owned.

The last person to pass through Ellis Island was a Norwegian merchant seaman by the name of Arne Peterssen in 1954.