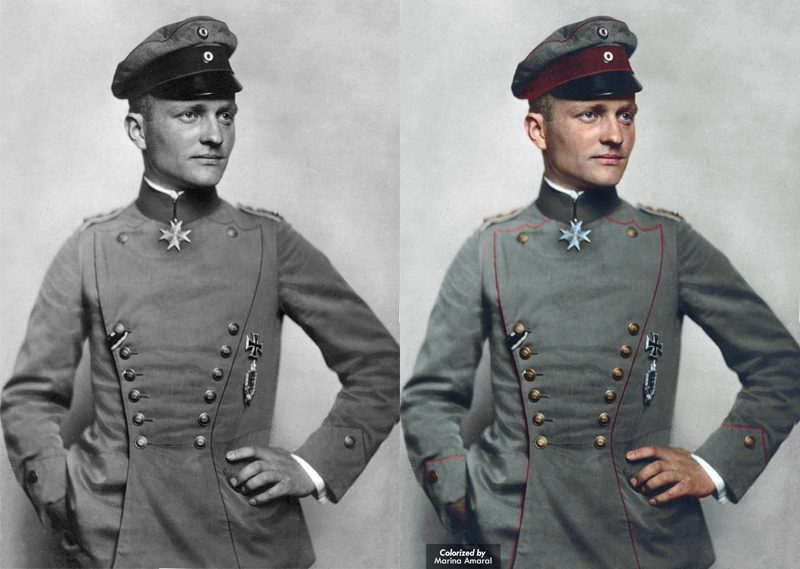 Manfred von Richthofen (1892-1918) earned widespread fame as a World War I ace fighter pilot. After starting the war as a German cavalry officer on the Eastern Front, Richthofen served in the infantry before seeking his pilot’s license. He transferred to the Imperial Air Service in 1915, and the following year began to distinguish himself in battle. The leader of a squadron known as the Flying Circus, Richthofen developed a formidable reputation in his bright red Fokker triplane. He was credited with 80 kills before being shot down, his legend as the fearsome Red Baron enduring well after his death.

He began his career in World War I as a cavalry officer on the Eastern Front, but in 1915, when detailed for quartermaster duty, he rebelled: “I have not gone to war to collect cheese and eggs, but for another purpose.” After initially failing his pilot’s license, the future “ace of aces” saw action above Verdun and Kovel. In August 1916, Baron von Richthofen joined a new fighter squadron at the Somme and recorded his first “kill” on September 17; his eightieth and last came in April 1918; on April 21 he was shot down, probably by ground fire over the Somme. Richthofen’s bright red Fokker aircraft earned him the nicknames “red knight,” “red baron,” and “diable rouge,” and his habit of moving the squadron, tents, and equipment from base to base gave rise to the sobriquet “flying circus.”

The war in the air became Richthofen’s blood sport. He possessed the courage to kill or be killed, flaunting his daring with reckless abandon and dispatching his victims in a brutal, pitiless manner. Preferring not to fight alone, he remained above his squadron in a dogfight until he spied his chance to swoop down, hawklike, upon unfortunate stragglers. “Everything in the air,” he once boasted, “belongs to me.” Many of his “kills” were, in fact, joint efforts, but were credited to Richthofen to enhance his stature as a national hero.