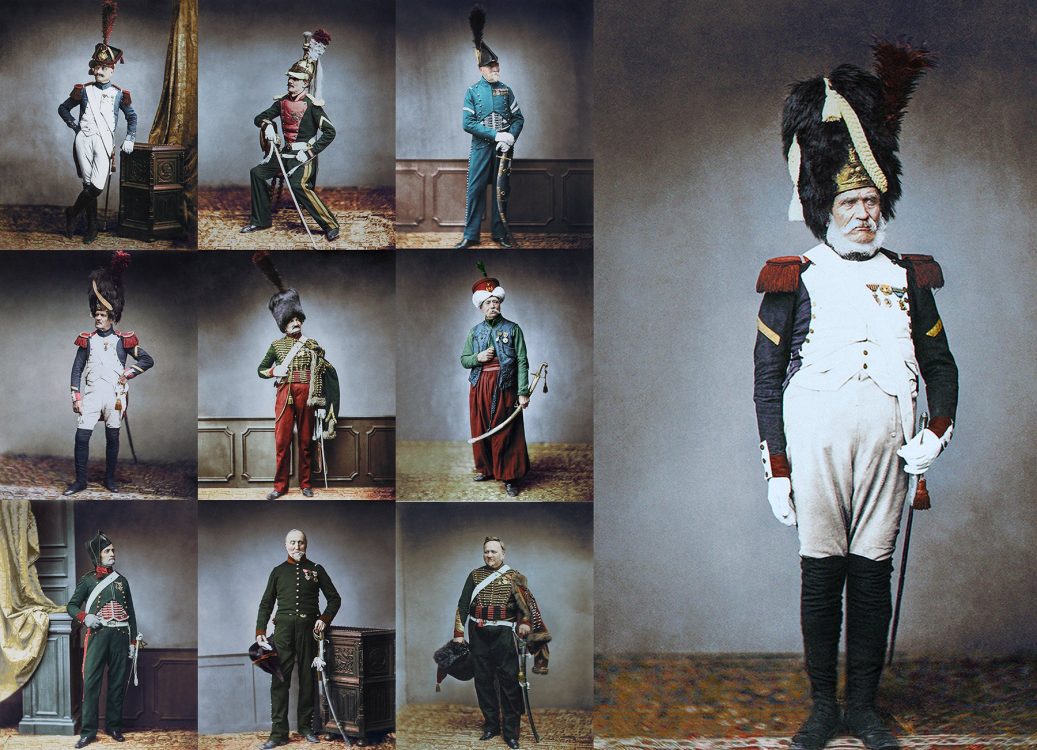 Some of the earliest photographs of veterans are a series of fifteen original sepia views of members of Napoleon’s army taken when these old soldiers were well into their 70’s and 80’s. It is not known how Mrs. Brown acquired them. They measure 12″ tall by 10″ wide and are mounted on stiff card. At some time in the 20th century, the name of each veteran and his regiment was inscribed in pencil on the verso of each.

These remarkable photographs provide probably the only surviving images of veterans of the Grande Armée and the Guard actually wearing their original uniforms and insignia, although some of the uniforms have obviously been recut by tailors of the 1850’s. Each is a formal portrait of an individual gentleman photographed in a studio. Some of the men stand in front of a blank or paneled wall on a elaborately decorated carpet, while others are seated. One old veteran who appears to have lost his right eye, Monsieur Loria of the 24th Mounted Chasseur Regiment and a Chevalier of the Legion of Honor, stands against a piece of furniture that appears also in other portraits by a curtain. It is not known who the photographer was and the blurring on one or two suggests the difficulty aging subjects had in standing still for several seconds while the plates were exposed.

When and why these men were photographed is a mystery but some clues are offered in Henri Bouchot’s book L’Epopée du Costume Militaire Franç ais published in Paris in 1898, and containing pictures by the famous French military illustrator, Job. There is a color plate with a transparent overlay bearing the titled ‘Les Vieux de la vieille, Le 5 Mai, 1855’. This depicts ten Napoleonic veterans in their full uniforms passing the column in the center of the Place Vendô me erected by Napoleon to commemorate the battle of Austerlitz. A Second Empire zouave of the current French army looks at the hunched and slow moving procession. Most significantly is the fact that two of the veterans are carrying wreaths. If one compares the individuals in the photographs, they match up very well with the figures crossing the square.

Original photos and text: courtesy of the Brown University Library.