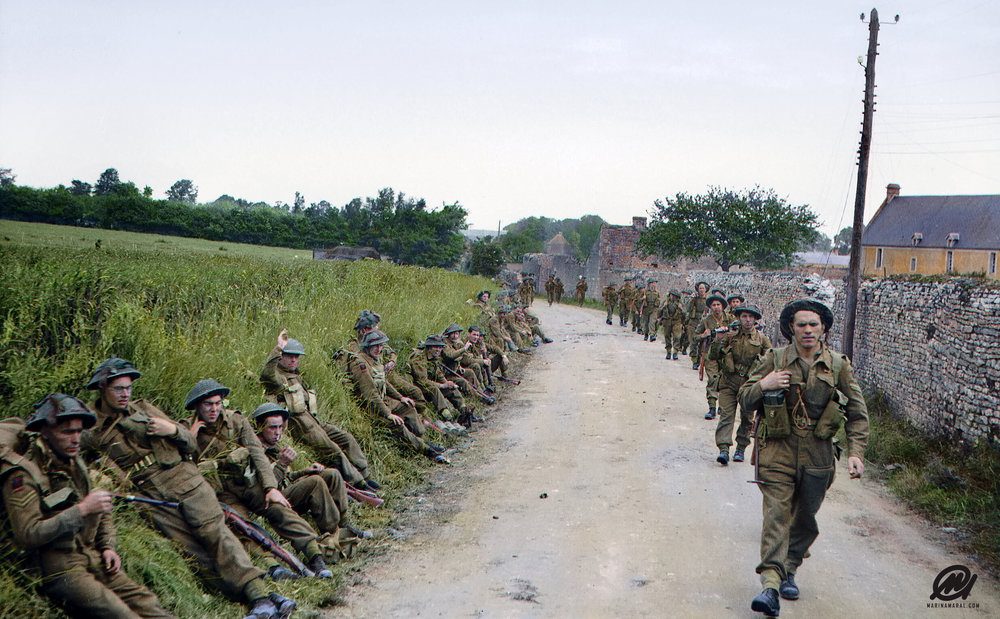 On this day in 1944, more than 1,000 British bombers drop 5,000 tons of bombs on German gun batteries placed at the Normandy assault area, while 3,000 Allied ships cross the English Channel in preparation for the invasion of Normandy—D-Day.

The day of the invasion of occupied France had been postponed repeatedly since May, mostly because of bad weather and the enormous tactical obstacles involved. Finally, despite less than ideal weather conditions—or perhaps because of them—General Eisenhower decided on June 5 to set the next day as D-Day, the launch of the largest amphibious operation in history. Ike knew that the Germans would be expecting postponements beyond the sixth, precisely because weather conditions were still poor.

Among those Germans confident that an Allied invasion could not be pulled off in the sixth was Field Marshal Erwin Rommel, who was still debating tactics with Field Marshal Karl Rundstedt. Runstedt was convinced that the Allies would come in at the narrowest point of the Channel, between Calais and Dieppe; Rommel, following Hitler’s intuition, believed it would be Normandy. Rommel’s greatest fear was that German air inferiority would prevent an adequate defense on the ground; it was his plan to meet the Allies on the coast—before the Allies had a chance to come ashore. Rommel began constructing underwater obstacles and minefields and set off for Germany to demand from Hitler personally more panzer divisions in the area.

Bad weather and an order to conserve fuel grounded much of the German air force on June 5; consequently, its reconnaissance flights were spotty. That night, more than 1,000 British bombers unleashed a massive assault on German gun batteries on the coast. At the same time, an Allied armada headed for the Normandy beaches in Operation Neptune, an attempt to capture the port at Cherbourg. But that was not all. In order to deceive the Germans, phony operations were run; dummy parachutists and radar-jamming devices were dropped into strategically key areas so as to make German radar screens believe there was an Allied convoy already on the move. One dummy parachute drop succeeded in drawing an entire German infantry regiment away from its position just six miles from the actual Normandy landing beaches. All this effort was to scatter the German defenses and make way for Operation Overlord, the Allied invasion of Normandy.

In color | Marie Curie in her laboratory in Paris, 1912