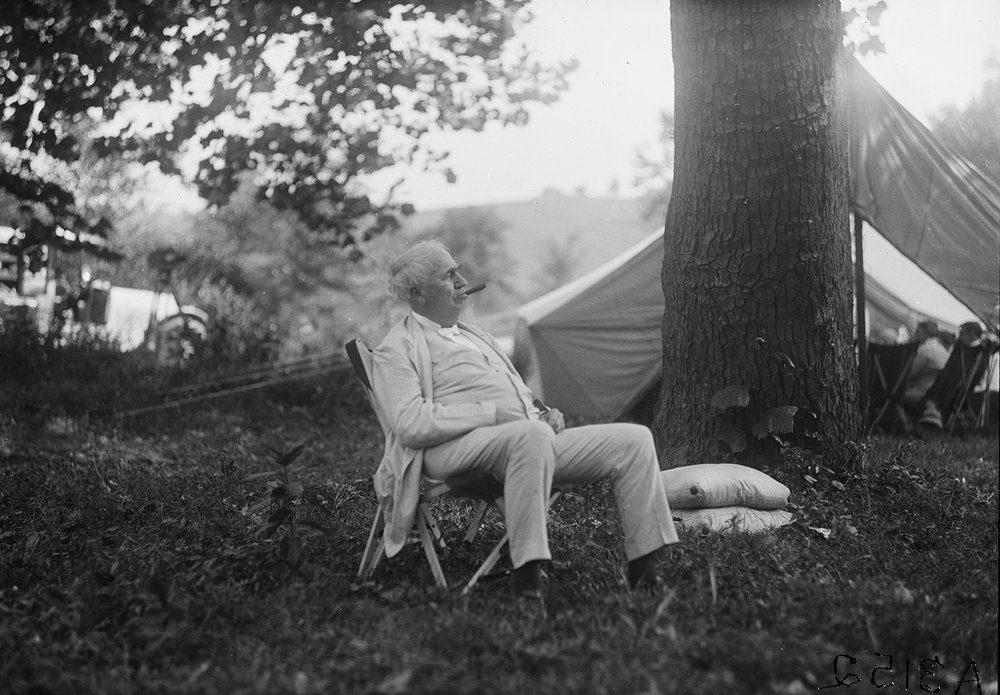 Between 1915 and 1924, Henry Ford, Thomas Edison, Harvey Firestone, and John Burroughs, calling themselves the Four Vagabonds, embarked on a series of summer camping trips. The idea was initiated in 1914 when Ford and Burroughs visited Edison in Florida and toured the Everglades. The notion blossomed the next year when Ford, Edison and Firestone were in California for the Panama-Pacific Exposition. They visited Luther Burbank and then drove from Riverside to San Diego.

In 1916, Edison invited Ford, Burroughs and Harvey Firestone to journey through the New England Adirondacks and Green Mountains; Ford, however, was unable to join the group. In 1918, Ford, Edison, Firestone, his son Harvey, Burroughs, and Robert DeLoach of the Armour Company, caravanned through the mountains of West Virginia, Tennessee, North Carolina and Virginia. Subsequent trips were made in 1919 to the Adirondacks and New England; in 1920 to John Burroughs’ home and cabin retreat into the Catskill Mountains; in 1921 to West Virginia and northern Michigan; and in 1923 to northern Michigan. In 1924, the group journeyed to northern Michigan by train, gathered again at Henry and Clara Ford’s Wayside Inn in Massachusetts, and visited President Coolidge at his home in Vermont.

The trips were well organized and equipped. There were several heavy passenger cars and vans to carry the travelers, household staff, and equipment; Ford Motor Company photographers also accompanied the group.

The 1919 trip involved fifty vehicles, including two designed by Ford: a kitchen camping car with a gasoline stove and built-in icebox presided over by a cook and a heavy touring car mounted on a truck chassis with compartments for tents, cots, chairs, electric lights, etc. On later trips, there was a huge, folding round table equipped with a lazy susan that seated twenty. After 1924, the growing fame of the campers brought too much public attention and the trips were discontinued. Source: TheHenryFord.org

Hermann Göring sits in the dock at the Nuremberg trial, 1946.